Table 1.1 Awaran District at a Glance

Brief History of the District

Awaran district was given the status of a separate district in 1992; till then, it was a tehsil of Khuzdar district.

During British Rule, Khuzdar was the headquarters of the Jhalawan Division of Kalat State. At Partition,[1] Jhalawan was the southernmost district/subdivision of the Balochistan State Union which consisted of the Kalat, Kharan, Makran, and Lasbela Princely States. In 1955, when One Unit[2] was formed, all Princely States were abolished, and Jhalawan/Kalat was merged with West Pakistan.

The early history of this part of Balochistan is obscure, and very little definite information is available about the time period before the advent of the Arabs (who ousted the Rai Dynasty of Sindh) in the 7th century AD.

General Krateros of Alexander’s army has been mentioned in the Gazetteer of Sarawan, Kachhi, and Jhalawan 1907. According to this text, the general, with his men, crossed over to Persia (on his way back to Greece) via the Mula Pass.[3] Sir T. Holdich[4] conjectures that he went by the Mula Pass and crossed the settlement of Choarene, which could have been Khuzdar. After that, nothing has been recorded about the history of this area till the arrival of the Arabs.

During Arab rule, Khuzdar was the principle settlement of this area, located as it was at the convergence of roads from Multan (via Mula Pass), Makran, and Kandahar. This made it an important area for the Arab rulers. Awaran was located on the route of Arab trading caravans as well as Arab armies traveling to and from the Arabian Peninsula. To-date, it is located at the confluence of the link road between Turbat-Gawadar-Karachi and Karachi-Quetta Regional Cooperation Development (RCD) highway.

Awaran was previously known as Kolwa.[5]

At the Federal level, Awaran district is allocated a set number of representatives in both the National Assembly and the Provincial Assembly:

Under the Local Government Act 2010, Amended in 2011, Awaran district has one District Council and 2 Municipal Committees as follows:

Awaran district covers an area of 29,510 km² and is subdivided into 3 tehsils named after their major towns:

There are no historical/ heritage protected sites in the district.

The Hingol National Park is the largest National Park, parts of which are located in Awaran. It houses a large variety of fauna and flora, which makes it a good tourist spot as well as picnic area.

The Hinglaj Mata Mandir (Hindu temple) located in the Hingol National Park is dedicated to Hinglaj Mata, a powerful Hindu deity who is believed to bestow good on all her devotees. Hinglaj is her main temple, but there are other temples dedicated to her in the neighbouring Indian States of Gujarat and Rajasthan. 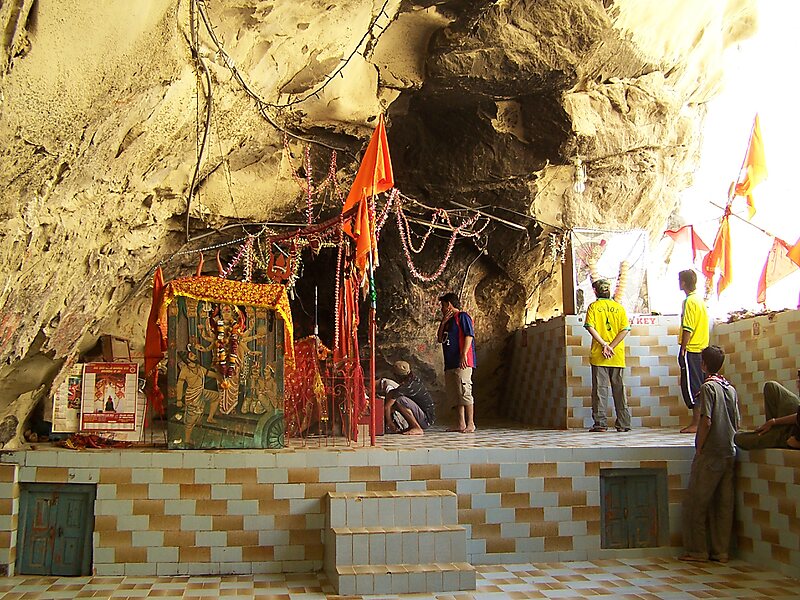 [2] One Unit was a geo-political program under which the four provinces of West Pakistan were merged into a single province in 1955. The provincial system was reinstated in 1970

[3] Mula Pass is located in the Central Brahvi Range

[4] Sir Thomas Holdich was a geographer, and the president of the Royal Geographical Society

The topography of the district is dominated by rough mountains and hills, which run from northeast to southwest. The general elevation of the district varies from about 1,000 to 2,000 m above sea level. The eastern part of the Central Makran Range runs along the northwestern border of Awaran. Parallel to this range, further east, are the Garr hills. The two ranges are separated by the Mashkai River, which is a tributary of the Hingol River. The Hingol flows down the Central Makran Range. 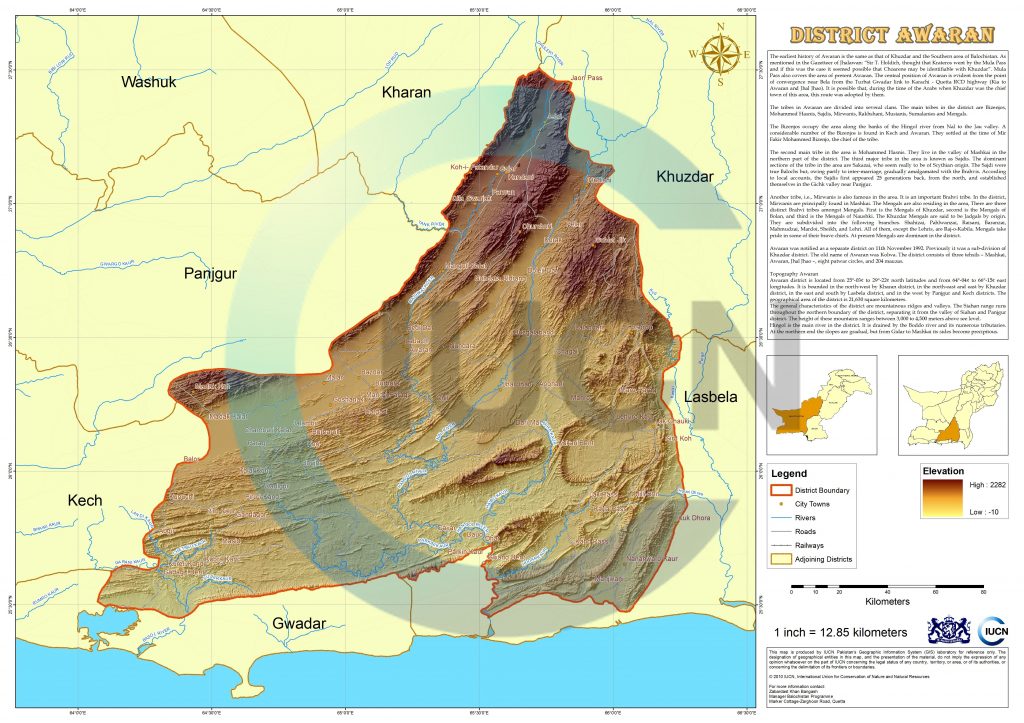 The important river of the district is Hingol, which has several tributaries which drain the district. Important tributaries are the Mashkai and Nal. The Nal River, in its upper portions, is called Gidar Dhor, and originates from the Surab Valley. Other seasonal rivers/streams of the district are Kud, Arra, Mur, Habibo, Parkin, Lop River, Churok Kaur, Sigar Kaur, Chil River, Kolwa Chhil Kaur, and Pao River.

Some of the seasonal streams are Doraski Dap Kaur, Zandugawash Kaur, and Chaki Kaur.

There are no State Forests in Awaran. All uncultivated areas of the district have been designated as forests, and the Forest Department is planting saplings on this land while also distributing saplings to the general public for planting. Other Government Agencies are also helping the Department by planting saplings.

Part of the Hingol National Park lies in the Awaran district. 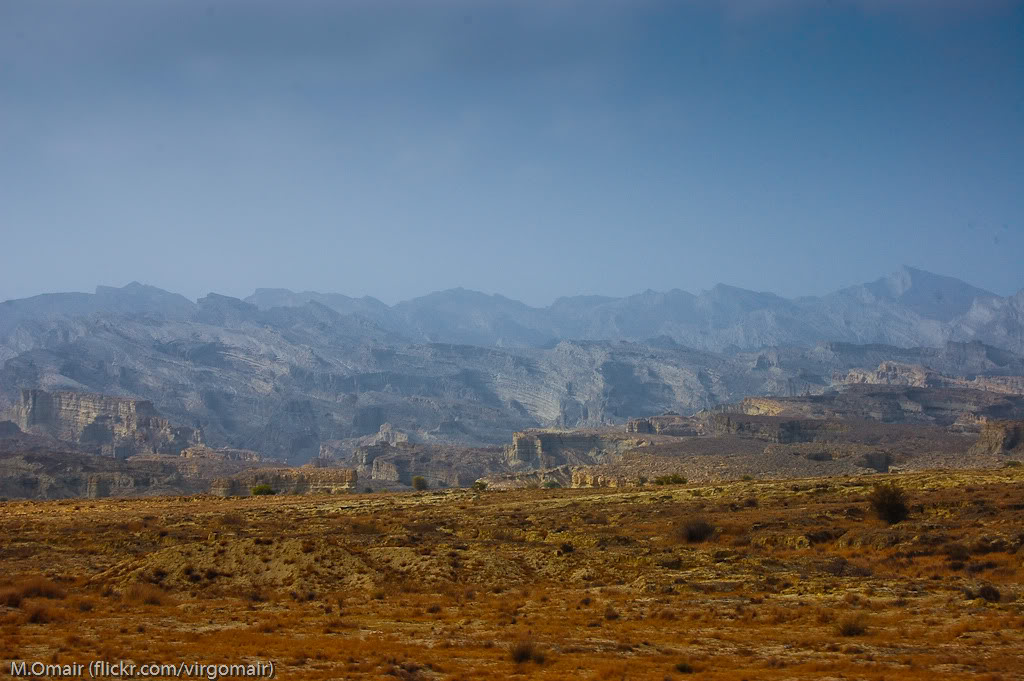 The soil of the district is fertile both in irrigated and un-irrigated tracts, but due to the non-availability of water, most of the area is permanently barren. The soil of Mashkai, Jhal Jhao, and surrounding areas of Awaran is very fertile.

The climate of Awaran is hot in the summer and cool in the winter. Dust storms are frequent throughout the year. The storms become very severe from June to September, when they are locally known as livar. Summer days are hot but nights are cool. June is the hottest month, with maximum and minimum temperatures of about 39 °C and 24 °C respectively. January is the coldest month, with mean maximum and minimum temperatures of 17 °C and 4 °C respectively.

The rainfall in the area is scanty and uncertain. Normally, July is the wettest month. Usually there is more rainfall during winter than in summer; winter rains occur from December to March. Mean annual rainfall recorded at Khuzdar (the nearest Meteorological station) is 109 mm.

The district belongs to Zone 2B of the Seismic Zone Map of Pakistan. This means there will be minor to moderate damage to property in case of an earthquake.

The following table shows the population of the district according to 2017 Census:

The main economic occupations of the district[1] are:

According to the United Nations’ Human Development Indicators, Awaran is the most underdeveloped district in Balochistan, Pakistan.

The district is included in the Dry Western Plateau Agro-Ecological Zone of Pakistan; farming activity is mostly barani or rain-fed, based on subsistence level farming. The land is mostly irrigated by springs, karezes, and tube wells.

Livestock is a very important sector of the economy. It is the main source of income for nomadic families.

The following table shows the Livestock Population in the district, drawn from the Livestock Census 2006 (qtd. in Balochistan Development Statistics 2018-19):

The indigenous livestock breeds of the region are brahvi camel, mangeli sheep, and lehri goat. 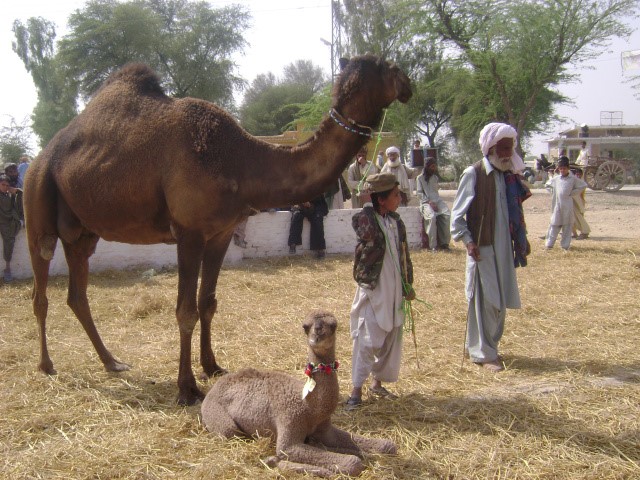 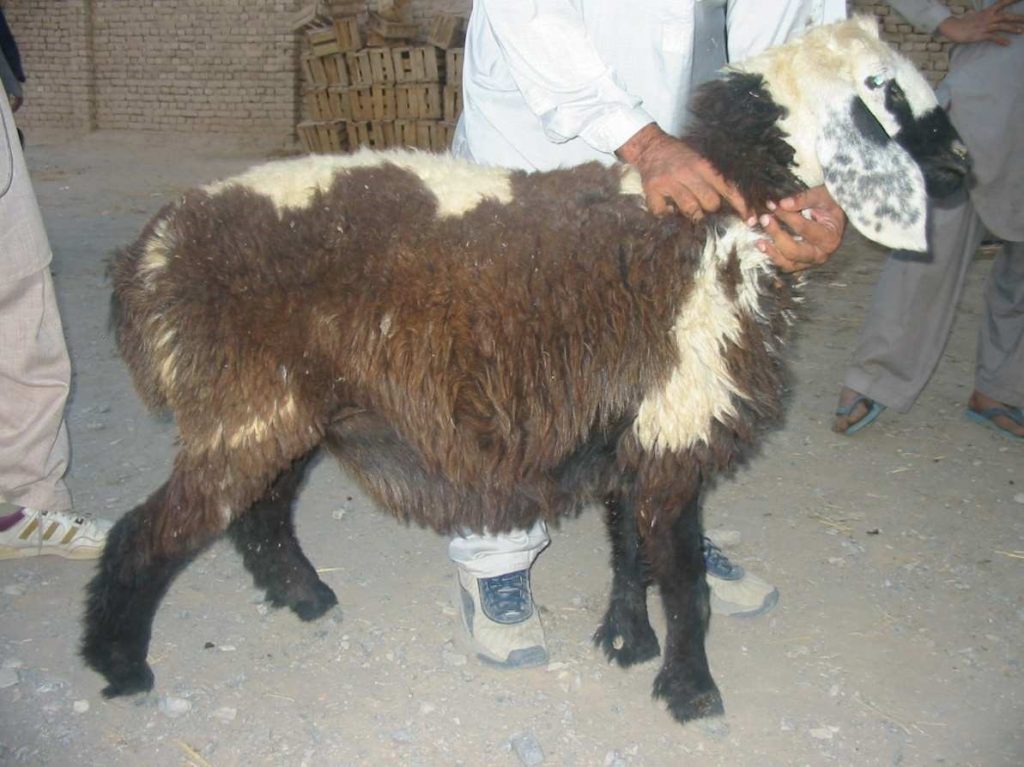 No data is available on the number of poultry farms in the district, but, according to the Livestock Census 2006 (qtd. in Balochistan Development Statistics 2018-19), there are 111,486 poultry birds in the district.

Fish is found in the Hingol River in limited quantities. Fishing does not contribute to the economic activity in the district.

Only wild honey is locally used in the district, and bee keeping is not a statistically significant commercial/ economic activity.

The district is mostly barani, and depends on rain water for harvesting. The ancient karez system is still in use in the district. The following table shows the mode of irrigation and area being irrigated by the mode (Balochistan Development Statistics 2018-19):

A number of small dams are being constructed which will help irrigate the lands; these are:

Due to a lack of infrastructure, transport facilities, and communication problems, mineral resources are still unexplored in Awaran. The district possesses large quantities of chromate and building stone but these are yet to be mined, although asbestos, barite, and building stones are being mined on a small scale.

There are no industrial units in the district. The district lacks infrastructure and other basic services, which impedes industrial development and investment.

Trade activities are import-oriented and no significant export of goods is reported in the district. A small quantity of dates is exported to Karachi and Quetta, while almost all consumer items are imported from Karachi, Quetta, and Turbat.

The only handicrafts of the district are embroidery on clothes, and sandals/shoe making, which is generally undertaken by the women of the district, who sell their work (completed in the domestic setting) to brokers at low prices. This work is subsequently sold in urban markets like Karachi and Quetta. 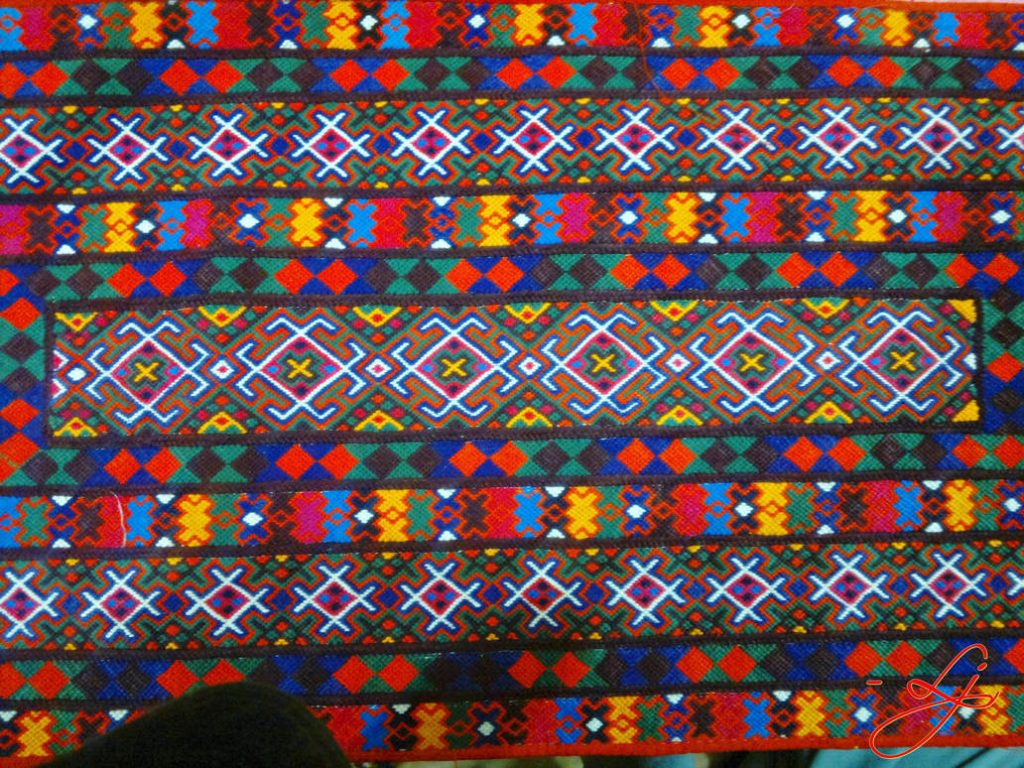 Awaran has limited infrastructure and lacks roads, as well as other means of transportation, communication, and even electricity. However, over the past few years, the situation has improved, and some facilities have been developed in the district.

According to Balochistan Development Statistics 2018-19, the road statistics of the district are as follows:

Some of the important roads of the district include Karachi Road, which connects Motorway M-8 with National Highway N-25 at Bela.

Some important shingle roads are:

No rail or air service is available in the district. The nearest airport is at Khuzdar, called the Khuzdar Airport.

No television booster functions in the district; the nearest radio station is at Turbat.

The district is connected to other parts of the country through telephone and telegraph. There is 01 telephone exchange in Awaran, which provide 516 landline connections, 1,010 wireless phones and 429 broadband connections in the district (Balochistan Development Statistics 2018-19).

Cellular phone companies also provide their services in the district.

There is only one post office in the entire district (Balochistan Development Statistics 2018-19). Courier companies provide services in the district as well.

According to the List of Reporting Bank Branches 2019 by State Bank of Pakistan, the following banks have their branches in the district:

In all there are 04 branches of various conventional banks in the District.

Quetta Electric Supply Company (QESCO) looks after the supply and transmission of electricity to the district. The district receives its electric supply through the Turbat Grid Station.

The following table shows the number of primary, middle, secondary, and mosque schools (among others) in the district, as per Balochistan Development Statistics 2018-19:

In addition there are privately owned educational institutions in the District.

There are no private sector health facilities in the district.

Levies and the Makran Scouts are responsible for policing the district. There are 3 levies or thanas (posts) in the district. The levies force is directly under the control of the Deputy Commissioner through the Assistant Commissioner and the Tehsildars. The Makran Scouts provide assistance to the thanas. The levies consist of Rasaldars, Jamadars, Dafadars, Hawaldars, Sawars, and other supportive staff including assistants, clerks, and drivers.

Justice is delivered through regular, as well as Qazi courts. The regular courts decide cases according to the criminal and civil laws applicable throughout the country, while the Qazi court makes decisions according to the Shariah laws as well as the constitutional laws of the Kalat Princely State (Qanun Diwan-i-Kalat).

There are 02 Police stations in the District (19.7 (a) Number of Police Stations by Division/District by Federal Bureau of Statistics 2019). 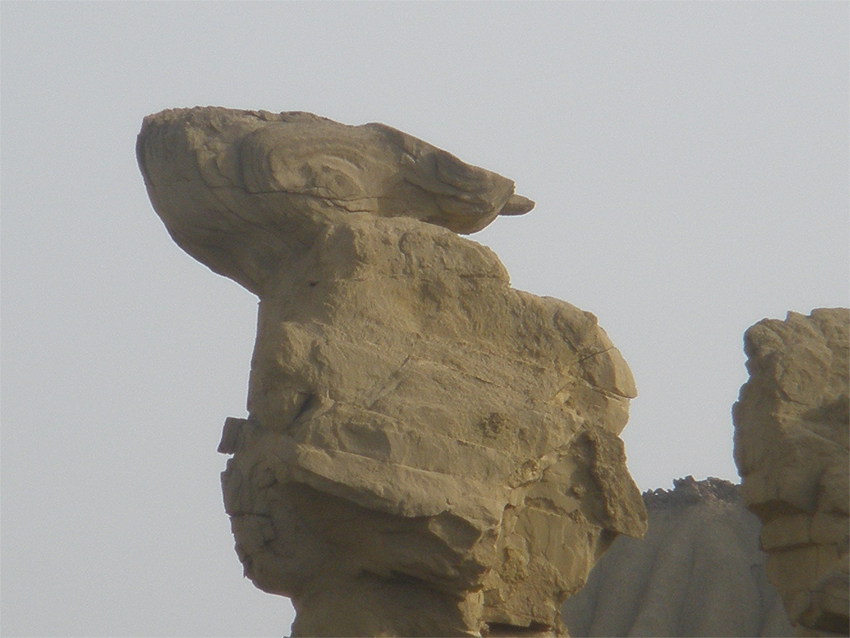 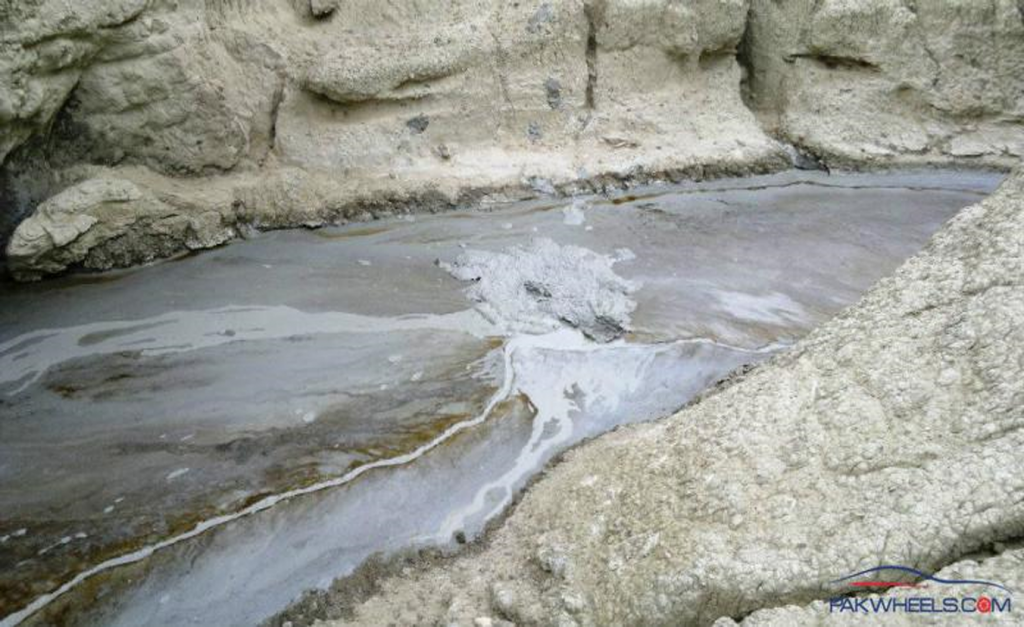 The district is free from air pollution as there is very little heavy traffic on roads and no industry. Presence of dust and a lack of a sanitation system in place in the district causes pollution. Potable water is a scarcity.

There is very little vegetation in Awaran district. There are no forests and the trees are few and scanty; most common trees are date palm trees.

Parts of the Hingol National Park and the Kolwakop Wildlife Sanctuary are the Protected Wildlife Areas of the district. These areas are located in the Hingol River Basin and provide sanctuary to the Sindh ibex, chinkara gazelle, Afghan urial, black bear, marsh crocodile, and houbara bustard among other fauna.