Balochistan is a gateway to the landlocked Central Asian Republics and Afghanistan. The economy of the province is largely based on the mining of natural gas, coal, and minerals. Livestock breeding and agriculture are also important economic activities in the province. The province has a 770 km[1] coastline extending from the mouth of the Hub River in the East to the Iranian border in the west, where fishing is carried out on a large scale. Balochistan accounts for nearly 30% of the total fish caught for commercial consumption in Pakistan.[2] Gwadar is one of the main fish harbours of the province. Balochistan, in fact, has been contributing 4% to the overall GDP of Pakistan for the last 15 years.[3]

The province contains more than 33% of the country’s natural gas deposits, about 9% of coal, and 2% of untapped oil reserves.[4]

[2] Total Physical Area of the Province

According to the Balochistan Conservation Strategy by IUCN, nearly 6% of total land is under cultivation. Agriculture with its allied livestock breeding is the mainstay of the economy and employs nearly 45.5% of all labour force of Balochistan.[1] The province is known as the Fruit Basket of Pakistan because of the quality and variety of fruit production. The province produces 90% of grapes, cherries and almonds, 60% of peach, pomegranate and apricots, 34% of apples and 60% of all dates produced in Pakistan.[2]

Balochistan relies on a pastoral economy and thus livestock breeding is an important sector of the rural economy of Balochistan that contributes about 40% to the provincial GDP. Livestock farming largely depends on the rangelands of the province. This sector contributes meat and milk for human consumption and by-products such as skins, wool, hair, and manure for local use, and contributes largely to export earnings as well.

The province possesses some well-known breeds of livestock. According to Balochistan Conservation Strategy, by IUCN,

There are 6 main breeds of sheep in Balochistan: bibrik, Balochi, harnai, rakhshani, kakri, and mengali. Goat breeds kept for hair and meat production are the pahari, kajli, khurasani, and lehri, while those kept for milk production are the Barbary and kamori crosses. Some exotic sheep and goat breeds have been introduced in Balochistan in the recent past. These include awassi, rambouillet, polled dorset and karakul sheep and the teddy (Bengal goat) and angora goats. Cattle breeds include bhagnari, lohani, and red Sindhi. The camel commonly found is the Arabian one‑humped camel. There are two main types of camels in the province: the Mahari and Bari or bar-bardari/ ladu. (p. 80) 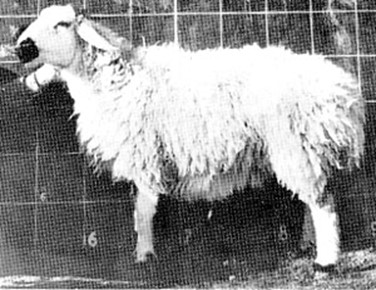 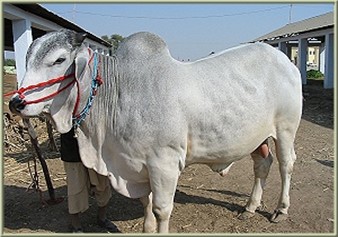 Backyard poultry farming is an intrinsic part of Pakistan’s rural economy. Poultry contributes meat and eggs. Initially, a few heads of poultry were kept by all farmers and livestock breeders, but later, as the demand for poultry grew, commercial poultry farms were established, and now commercial poultry breeding is an important part of not only the rural but the urban economy. In Balochistan, there are 321 poultry farms with a total of 1,091,492 birds.[4]

The Balochistan coast extends 770 km from the mouth of the Hub River in the east to the Iranian border in the west. Administratively this coastal belt falls into 2 districts: Gwadar (the Makran Coast) and Lasbela.

The coastline in Gwadar district is nearly 600 km long, running from the Iranian border at Jiwani to the Hingol River in the east. Bays, beaches, and headlands characterize the coastline. The bays and headlands provide natural harbours around which 35 fishing communities have developed.

The Lasbela coastal belt lies between the Hingol River and the Hub River. This coastline is dominated by the Sonmiani Bay. Miani Hor, the large lagoon formed at the mouth of the Porali River, is a distinctive feature of the Sonmiani Bay. There are 2 fishing villages in the district.

There are 2 fishing harbours in Balochistan:

Fishing is a very important economic activity in Balochistan and it contributes about 30% of all fish in Pakistan.

Honey is an important non-wood forest product which offers ample opportunities for promotion of bee keeping; however, people usually follow traditional management practices. The government of Balochistan is providing training to its rural population in the art of apiculture and honey processing.

Honey is being produced in the mangrove forests of the province, but in most of the province, honeybee keeping is not taken up as an economic activity, mostly due to the harsh and cold climate.

Balochistan is a water scarce province. The water resources of the province consist of surface water and ground water, with the source being precipitation alone, which is scanty. Most of the natural streams remain dry most of the year. Hence, the groundwater is the most dependable source of water for irrigation. The Karez system is an ancient method of tapping ground water resources, and is used extensively in Balochistan. Karez are gently sloping, horizontal underground tunnels with vertical shafts/wells for ventilation and periodic cleaning. The horizontal tunnels are laid on natural gradients for conveying water from the mother well located at the foot of a mountain to the daylight point in valley floors, from where it is distributed in open channels for different uses including agriculture and domestic use. Irrigation through Karez is a traditional and age-old practice of meeting crop water requirements, tapping and conveyance, and is quite useful, convenient, and easy to operate due to the fact that water flows under gravity and does not require energy consumption for pumping from the source to the command area. Other modes of irrigation are dug-wells and tube wells, as well as canals from the River Indus, storage/delay action dams and spate irrigation/sailaba or floodwater irrigation.

The following table shows the mode of irrigation and area irrigated by each mode in Balochistan (Balochistan Development Statistics 2018-19):

In Balochistan, due to extreme aridity and a dearth of perennial sources of surface water, groundwater has been considered the only dependable source of water to meet water needs. Historically, groundwater has been extracted from dug-wells, Karez, and springs. With the increase in the need for more water due to increase in agriculture and horticulture, this ground water depleted, and a need for recharge was felt; thus, recharge dams or delay action dams have been constructed in Balochistan. Pakistan Council of Research in Water Resources has constructed a number of “leaky dams” near Quetta,[1] a notable one being the Pechi Delay Action Dam near Ziarat.

A number of dams already exist in Balochistan, and there is a plan for construction of a large number of small dams in the province. The following table shows the name of the dam, river on which it is constructed, districts that are being benefitted and year of completion:

In addition, there is a scheme under which 100 small dams are being constructed in the province, of which a number have already been completed, while others are in varying stages of completion. Some of the dams are: 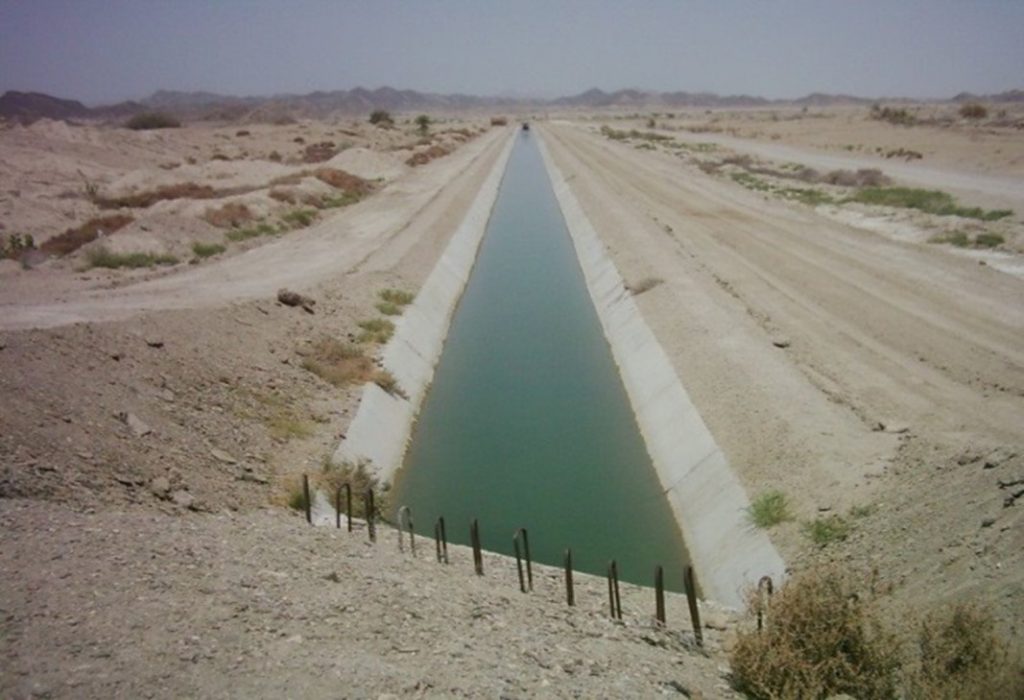 [4] Table 17. Number of Commercial Poultry Farms and Number of Birds by Size of Flock. Data on privately owned poultry farms is not available.

Balochistan possesses untapped deposits of metallic and non-metallic minerals. Some of the minerals that are being mined in the province are coal, chromite, barites, sulphur, marble, iron ore, quartzite, and limestone. In addition to these, copper, gold, manganese, silver, tungsten, alum, calcite, feldspar, garnets, gypsum, salt, graphite, dolomite, laterite, asbestos, soapstone, glass sand, ochres, and phosphate rock are also present in various parts of Balochistan, and these still need to be mined.

Balochistan is rich in natural gas and oil reserves. Natural gas is the most robust area of growth in the mineral sector. It was first discovered in Sui, a tehsil of Dera Bugti district of Balochistan in 1952. The Sui gas field is the largest gas field in Pakistan. There are large deposits of oil in the other parts of the province as well. Pakistan Petroleum is drilling and extracting oil from these blocks both in partnership with international companies and as a single entity.

The following map shows the location of various minerals found in Balochistan:[1] 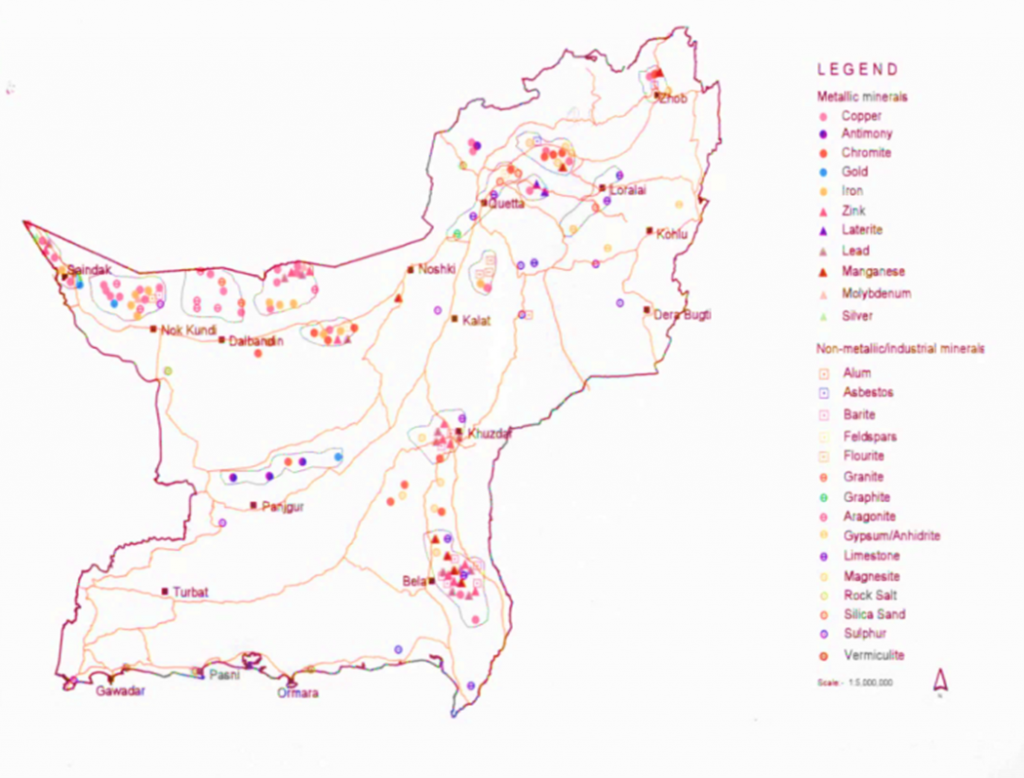 The following map shows the location of Oil and Gas Resources of Balochistan:[3] 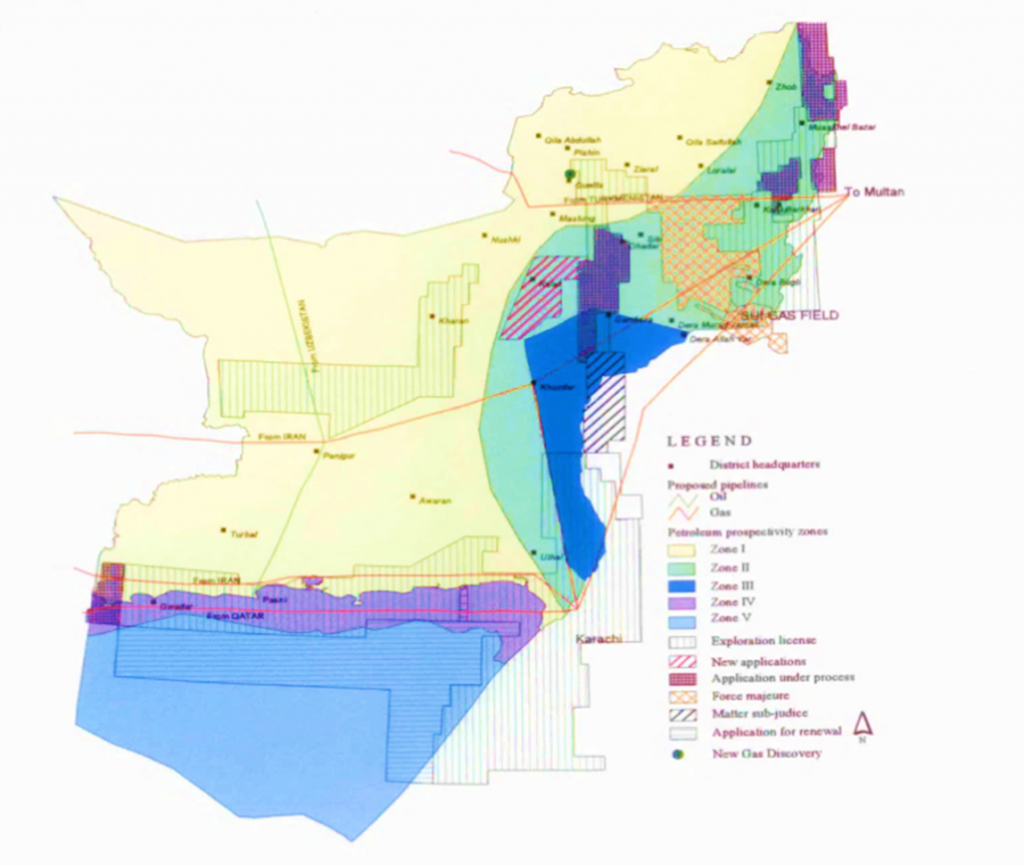 Besides the above, land has been earmarked for the establishment of some Mini Industrial Estates in the following districts:

The following table shows the type of industry and number of units of each industry in Balochistan as per Development Statistics Balochistan, 2005 as compiled and issued in April 2013:

Balochistan is famous not only in Pakistan but also internationally for handicrafts of beautiful and intricate craftsmanship. The most recognizable products feature exquisite mirror work, embroidery, as well as fine quality precious stone and marble work. Another popular art and craft of this region is Pishey artwork,[5] out of which, a variety of products like bags, shoes, hats, wall-hangings, and baskets are made. Embroidery from Balochistan is one of the most delicate forms of needlework. Balochi rugs are also famous worldwide for their fine finishing and their intricate patterns.

Needlework is done in various designs and techniques that vary from place to place within the province. Different areas of Balochistan are known for their distinctive designs. Dera Bugti, for example, is famous for Kowchik stitching, which has its own unique pattern and is embroidered on shawls and shirts for women. Kalat and Khuzdar districts are famous for Moshamka needlework, which involves stitchwork in different colours and may include mirror work. Sibbi district is well-known for its Jok needlework, in which fine thread of various colours and shades is used.

The needlework on dresses, cushion covers and bed sheets as well as embroidered Balochi chappals (sandals) are especially attractive. Embroidered caps, purses, and belts are also in demand. Beautifully handcrafted marble objects, like marble tables, ash-trays and other house/office decoration pieces are made out of the marble excavated in the Chagai district of Balochistan.

Handwoven carpets and wall-hangings of Balochistan are also very popular. The following map shows the handicrafts being produced in various parts of Balochistan[6]. 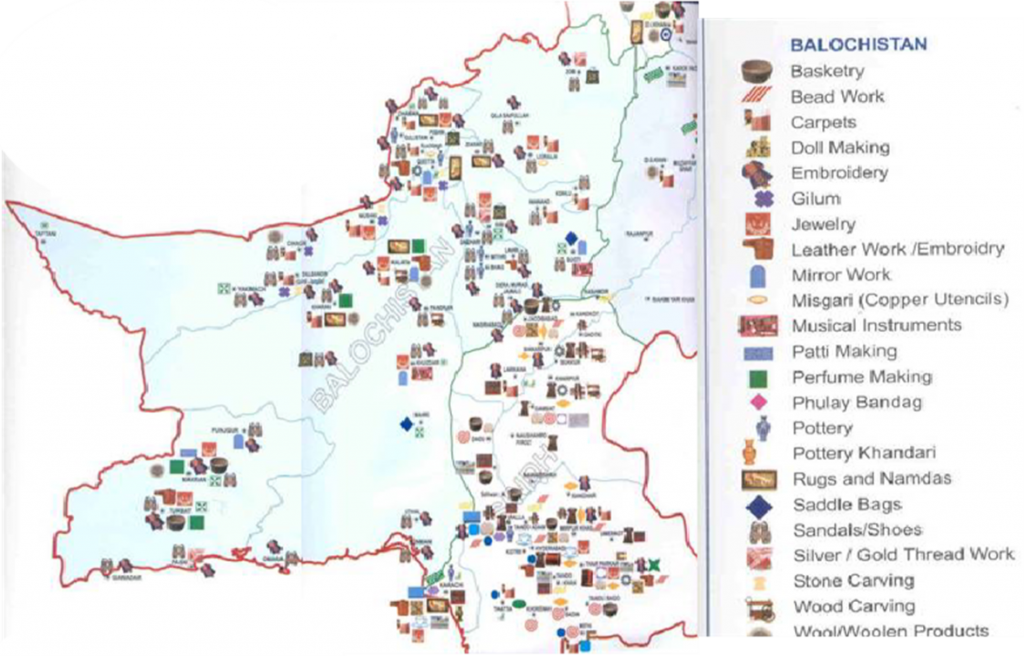 [5] Pish is a fan-palm that grows in clumps in beds of rivers running through salt grounds. Its leaves are used to make beautiful products.

[6] From Balochistan Investment Guide 2009 by SMEDA