The Jhal Magsi district has 2 tehsils: Gandawah and Jhal Magsi, and both these tehsils have different histories recounted below.

Gandawah town of the district is located in the Kachhi Plains and is an ancient town. It was originally known as Kandabil; in the 7th century AD, Rai Chach[1] had his headquarters at Kandabil (located east of Kalat). The Arabs reached Kandabil in 644 AD and changed the name to Gangaaba which later became Gandawah. The Arabs did not stay in the region and the area remained under the rule of the Chach Dynasty.

After the conquest of Sindh by the Arabs in 712 AD, the Kachhi area remained under Arab rule till the end of the 10th century AD, when the Kachhi Plains, including Kandabil/Gandawah, passed into the hands of the Soomras (also spelled Soomras; 1024-1351) and then the Sammas (1351-1524 AD) of Sindh.

The Baloch entered the area in the 15th century and the area became the battleground between their two leaders: the Great Mir Chakar Khan Rind and Gwahram Lashari[2]. The Rinds and allied clans arrived in the plains of Sibi through the Bolan Pass, while the Lasharis and their allied clans passed through the Mula Pass to spread into the plains of Kachhi-Gandawah country. There, the Rinds, led by Mir Chakar Khan, and the Lasharis, led by Mir Gwahram Lashari, quarreled leading to a dispute which resulted in a 30 year war. This war became the main theme of Baloch classical poetry. The Lasharis received help from the Samma ruler of Sindh, Jam Nizam-ud-din (1462-1568), and the Rinds were helped by the Arghuns of Afghanistan. The 30 year war sapped the energies of both tribes, and thus, the Arghuns were able to extend their power into the plains of Sibi and then to Sindh. Ultimately, under pressure from the neighboring rulers, the Rinds and Lasharis disengaged from the war, with the Rinds withdrawing to the Multan region, and the Lasharis toward Thatta.

The name of Kandabil/Gangaaba was officially changed to Gandawah during the British Colonial Period.

The Magsi branch of the Lasharis settled in the Jhal area of Kachhi which was then named Jhal Magsi. The word Jhal means a waterway; hence, the term Jhal Magsi literally means the “waterway of the Magsis.” Jhal Magsi is a purely Baloch area, and was part of the Kalat State and Kachhi province during the Colonial Period. The Magsi tribe enjoyed a great deal of autonomy during the Kalat Khanate; Kalat, in turn, was one of the native Princely States that had considerable tribal autonomy during the Colonial Period.

After Independence from the British in 1947, Gandawah was one of the Tehsil headquarters of Kalat district. In 1965, Kachhi was notified as a separate district and Gandawah became a Tehsil of Kachhi district.

The Jhal Magsi area was upgraded to a sub-Tehsil level in 1958 and made a part of Gandawah Tehsil. Jhal Magsi was made a subdivision in 1989.

Many important saints (Pirs) are buried in the district. Among them are Muhammad Ayub Shah Bukhari (Gandawah), Sain Rakhil Shah and Sain Chizal Shah (Fatahpur) and Pir Chattal Shah (near Kotra). Their followers visit these places frequently. Pir Lakha is a famous shrine near Jhal Magsi, with hot springs called Aab-i-shifa, bathing in which cures many skin diseases. Therefore, visitors regularly arrive in Pir Lakha from far flung areas.[4]

At the Federal level, Jhal Magsi district is allocated a set number of representatives in both the National Assembly and the Provincial Assembly:

Under the Local Government Act 2010, Amended in 2011, Jhal Magsi district has 1 District Council with 12 Union Councils. It has 1 Municipal Committee as follows:

Each Union Council is represented by 1 member in the District Council. In addition, there is special representation of women (33%) and of workers and peasants (5% each).

Jhal Magsi district has a total area of 3,615 km2 and is divided into 2 tehsils and 13 Union Councils as follows:

Some important shrines of saints (Pirs) are:

Since the district’s history is closely linked to the history of Sindh, tombs of various Kalhora kings are also found in the district in various areas. 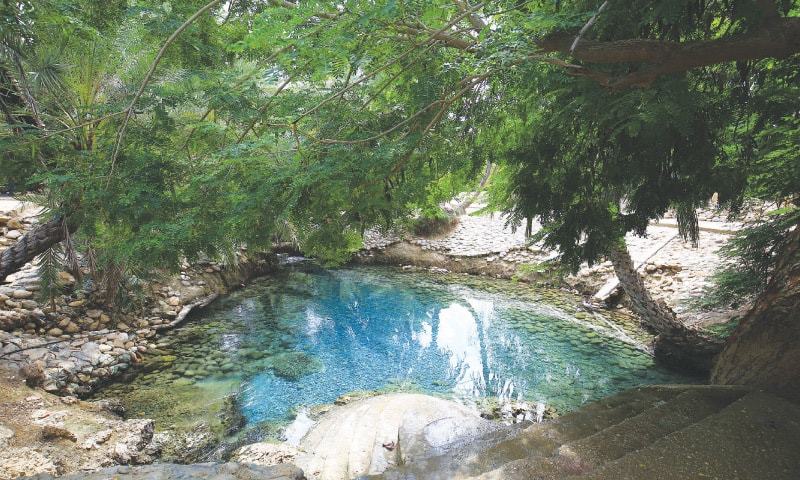 In 2005, a Jhal Magsi Desert Jeep Safari Rally was initiated. This event has since become an annual one, and attracts adventurers, while promoting tourism in the area.

There is a small oasis near Mula Chotok which has several water pools filled with clear water from waterfalls created by rivers flowing from nearby mountains.

[1] Rai Chach (610-671 AD) was a Brahmin who reigned as King of Sindh in the mid-7th century AD, a former Chamberlain and Secretary to the King Rai Sahasi II. Chach ascended to the throne by marrying the king’s widow.

[2]The Magsi Tribe are a branch of the Lashari Tribe

[5] This seat is shared by Panjgur district

Jhal Magsi district is mostly a Plain Area (almost 80%) with mountainous ranges in the west. The district is located 40 to 1,544 m above mean sea level and has an imperceptible slope from north to south.

Only 20% of the district is mountainous. These ranges are a part of Kirthar Mountain Range, which is one of the famous mountain ranges in Balochistan. The height of the hills varies from 300 to 1,200 m in general.

The main rivers are Bolan, Badra, Bagh, Sukleji, Nari, Sharkal, Dhoorir, Pir Chattal, and Mula which irrigate several thousand acres of land. The Mula River rises in the Kirthar Range and, after passing near the Mula Pass, enters Jhal Magsi, where the bed extends over a large area and is cut into a large number of channels. Other seasonal nalas (streams) are Narjo, Hingan, Kashok, and Sain. The district receives hill torrents from the Marri Bugti Hills and the Kirthar Range. 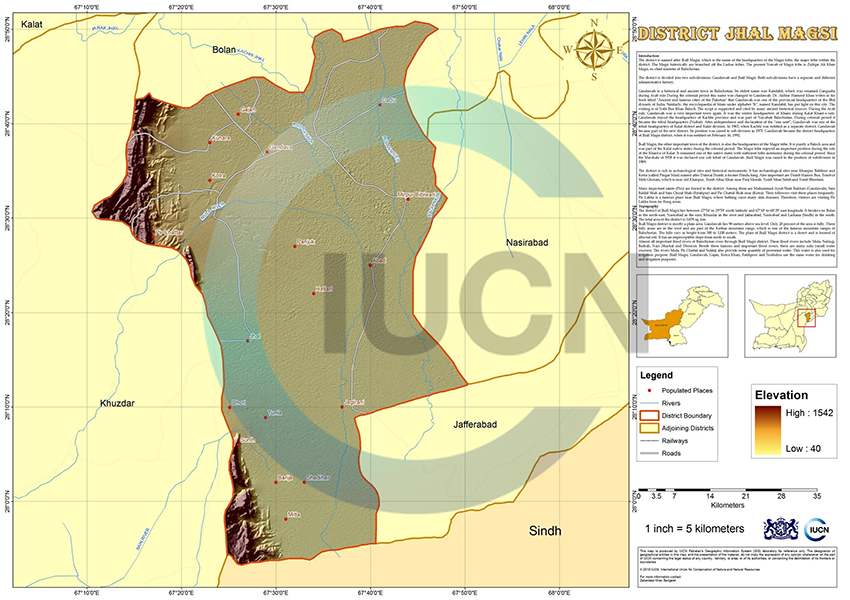 A total of 80,353 Acres of land is under scrub forests in the district. The main species of trees are peelu (Salvadora oleoides), maru (Maerua crassifolia), karir (Capparis decidua) and kikri (Acacia jacquemontii).

Gahela, near Ghajan, is the largest forest in the district.

The soils of Jhal Magsi district are alluvial in nature.

The climate of the district is extremely hot and dry in the summer. The summer season starts from April and lasts till October. June is the hottest month, with mean maximum and minimum temperatures of about 44 °C and 29 °C respectively. From November to the middle of March, the climatic conditions are pleasant. January is the coldest month and the mean maximum and minimum temperatures during this month are 23 °C and 8 °C.

Rainfall is scanty and varies from place to place. Average annual rainfall in the district is 110 mm.

The district belongs to Zone 3 of the Seismic Zone Map of Pakistan, which means moderate to severe damage due to earthquakes.

The following table shows the population of Jhal Magsi as per 2017 Census:

Main occupations in the district include:

Livestock breeding is the second most important sector of the economy. It is the main source of income for nomadic families. The following table shows the position of the Livestock Population in the district according to the 2006 Census of Livestock (qtd. in Balochistan Development Statistics 2018-19):

Fish are found in the Mula River and its tributaries; this fish is consumed locally.

Due to the arid nature of the landscape, scanty rainfall, and lack of vegetation, bee keeping is almost negligible in the district as a viable economic activity.

The following table shows the mode of irrigation and area being irrigated by the mode (Balochistan Development Statistics 2018-19):

According to the Jhal Magsi District Profile 2011, by the Planning and Development Department, Government of Balochistan in collaboration with UNICEF, 56% of land in the district is irrigated by canals.

After the completion of Phase 3 of the Kachhi Canal Project, more areas of the district will be brought under agriculture. Naulong Dam on Mula River will store water for irrigation as well as for drinking.

There are no minerals being mined in the district.

Possibility of oil and gas deposits is being explored in the district.

The industrial and manufacturing sector is almost non-existent. There are a few ice factories in the district that operate during the summer season only.

Shoes called chaba (in the local language) are handcrafted in the district. Other handicrafts include embroidery work, and carpets.

Jhal Magsi is connected with Khuzdar, Shahdadkot (Sindh), and Jacobabad (Sindh) and thus links different parts of Balochistan with Sindh. Khuzdar is linked with Shahdadkot (Sindh) through the Mula Pass and this route passes through district Jhal Magsi.

According to the Balochistan Development Statistics 2018-19, the road statistics of the district are as follows:

No railway and airways services exist in the district. The nearest railway station to Gandawah is at Natal and the nearest one to Jhal Magsi is Shahdadkot. The district has no airport. The nearest airport is Jacobabad airport.

Jhal Magsi has no radio or TV stations or even TV boosters. The inhabitants mostly listen to Khairpur Radio Station, which is a high powered station with a clear transmission. Its broadcasting language is Sindhi, which everyone in the district can understand and speak. The BBC radio channel is also very popular in the area. The Shikarpur television transmitter transmits its television signals to the area.

The district is connected to other parts of the country through telephone and telegraph. There are 02 telephone exchanges in Jhal Magsi district which provide 367 landlines, 467 wireless phones, and 235 broadband connections in the district (Balochistan Development Statistics 2018-19). Cellular phone companies also provide their services in the district.

There are no bank branches in the district.

In addition there are private schools and colleges in the District.

For the purposes of administration, the district is divided into two areas: “A” and “B”. The town area of Jhal Magsi comes under “A” area and the rest of the area of the district falls in “B” area. “A” area is controlled by a regular police force headed by the Deputy Superintendent of Police (DSP). This DSP is assisted by a Station House Officer (SHO), Inspector Police, and other staff. The “B” area is controlled by a levies force. Levies are a conventional force that maintains law and order. In levies, men of different tribes are employed. The levies force comes under the direct control of the Deputy Commissioner (DC). Generally, the levies force is well equipped to deal with any law and order situation in the district.

The policing of Jhal Magsi district is the responsibility of the Regional Police Officer (RPO) Naseerabad. This RPO is assisted by 1 SubDivisional Police Officer (SDPO) stationed at Gandawah. In all, there are 3 police stations in the district. (19.7 (a) Number of Police Stations by Division/District, 2019; Federal Bureau of Statistics) 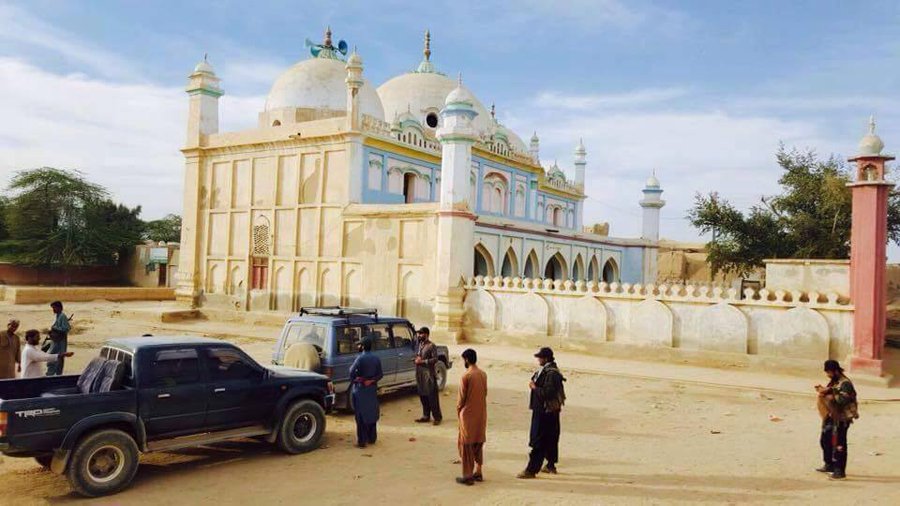 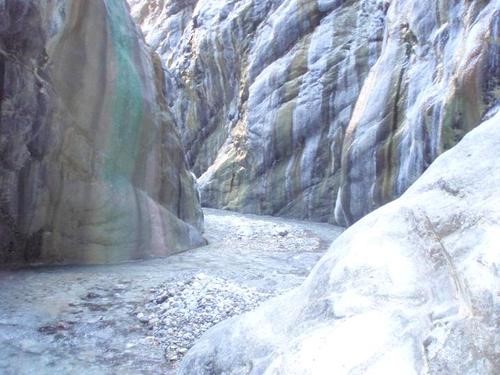 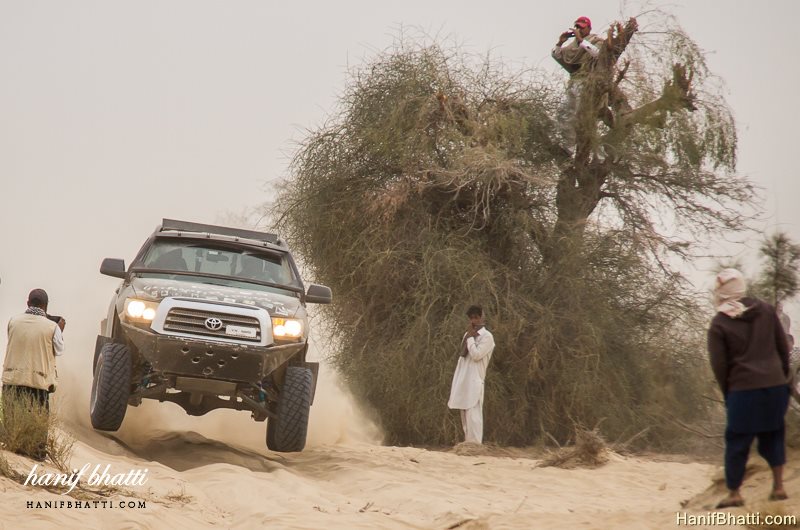 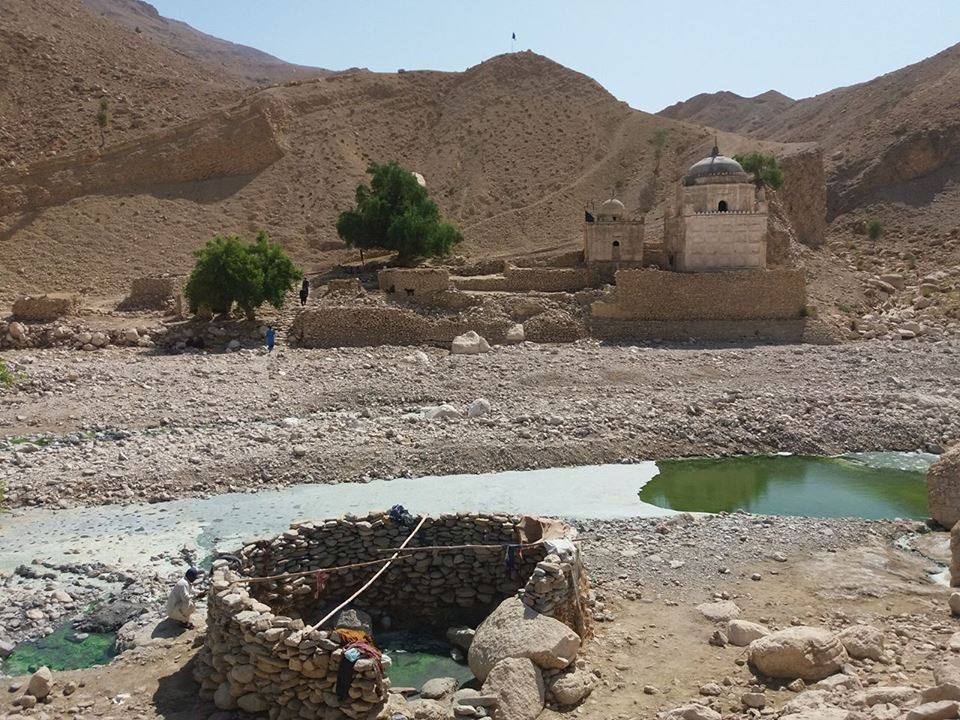 [2] there are plans of opening a Vocational Center at Gandawah

Vegetation zones of the district consist mainly of the following categories:

There are no protected wildlife areas in the District.