The district is named after the Khan of Kalat, Nawab Naseer[1] Khan Noori I, who was one of the most respected rulers of Kalat; he ruled Kalat from 1747-1794, and founded the Brahvi-Baloch Confederation, with its center in Kalat State.

Nasirabad District at a Glance

Table 1.1 Nasirabad District at a Glance

Nasirabad district is located in the Kachhi Plain areas of Balochistan. The Kachhi Plain is located to the south of Sibi, and extends into Nasirabad, as well as the southern part of Dera Bugti district, and the narrow plain area along the Makran coast stretching from Kachhi to the Iranian border.

At the time of the creation of Pakistan in 1947, Balochistan was mainly divided into 2 parts: British Balochistan comprising Quetta, Pishin, Zhob, and Loralai, and Native Balochistan (or area controlled by the indigenous tribes) consisting of Kalat, Kharan, Makran, and Lasbela Princely States.

The Kalat State or Khanate of Kalat was founded in 1666; it was located in the center of modern day Balochistan. Ahmad Zai Baloch ruled the State independently until 1839 when it became a self-governing State in a subsidiary alliance with British India.

The Kalat Khanate was at its peak during the period in which Mir Noori Naseer Khan Ahmadzai Baloch I (1749-1794) ruled; he unified the Kalat region under his flag. Nasirabad was named after him, and was a niabat (Tehsil/district) of the Kalat State. During Naseer Khan’s rule, the Khanate extended to the districts of Quetta, Kalat, Harrand (now in Rajanpur district of Punjab), Dajal (also in Rajanpur), Panjgur, Kech or Kasarkand (Makran, now Kech/Turbat district), Dizak (Iran) and Kharan (now a district). The borders of the territories controlled by the Khanate of Kalat fluctuated over the centuries due to conquests and war losses, but were eventually made permanent by treaties with the British Political Agent, Robert Sandeman in the late 19th century.

In 1883, the Quetta Niabat (comprising present-day Quetta Tehsil) and the Bolan Pass were permanently taken on lease by the British from Kalat State. In 1899, Nushki, and then in 1903 the Nasirabad Niabat, were similarly acquired from the Kalat State on a perpetual lease. Thus, Nasirabad became a part of British Balochistan and was made a subdivision of Sibi district. The early history of Nasirabad is, hence, synonymous to that of Sibi district, and is described in the chapter on Sibi.

Nasirabad remained a tehsil of Sibi district till 1974, when it was upgraded, and formed into a separate district. It was named Tamboo district, after a small village 40 km west of Dera Murad Jamali, and retained this name from July 1987 to December 1990. The name was changed to Nasirabad, with its headquarters at Dera Murad Jamali, in December 1990.

At the Federal level, Nasirabad district is allocated a set number of representatives in both the National Assembly and the Provincial Assembly:

Under the Local Government Act 2010, Amended in 2011, Nasirabad district has 1 District Council with 31 Union Councils. It has 1 Municipal Committee as follows:

Each Union Council is represented by one member in the District Council. In addition, there is special representation of women (33%), and of workers and peasants (5% each).

Nasirabad district has a total area of 3,387 km2 and is divided into 4 Tehsils with 24 Union Councils as follows:

Originally, Dera Murad Jamali was known as Temple Dera after the name of its founder, Captain M. H. Temple, who served as the Political Agent for Sibi from 1891 to 1892. Among the local population, it is still known as Tipel, a corruption of the word Temple.

There are no archaeological sites in the district, but there are some shrines[1] which are culturally important. These are:

District Nasirabad is located in the southeastern portion of the Balochistan province in the Kachhi Plain/ Basin area, which consists of flat valleys amid various mountain and hill ranges. It is surrounded on the west by the Kirthar and Central Bolan Ranges, and on the northeast by the Marri and Bugti hills. Other smaller hill ranges skirting the district are ranges of low hills called Pab Hills.

Mostly, the land of Nasirabad district is a flat plain which slopes from the south to the north and gains an elevation from 50 to 170 m above sea level.

There is no perennial river flowing through the district and the district depends on the canals for its surface water.

A few hill torrents, occasionally bringing flood waters, enter the district on the north from the Bugti Country, but are lost in the sand hills before they proceed very far into the district. The principal of these hill torrents are Goranari, Nilagh, Phanyan, Ghari Manak, Dingrizo, Bari, Kabula, and Bagh.[1] 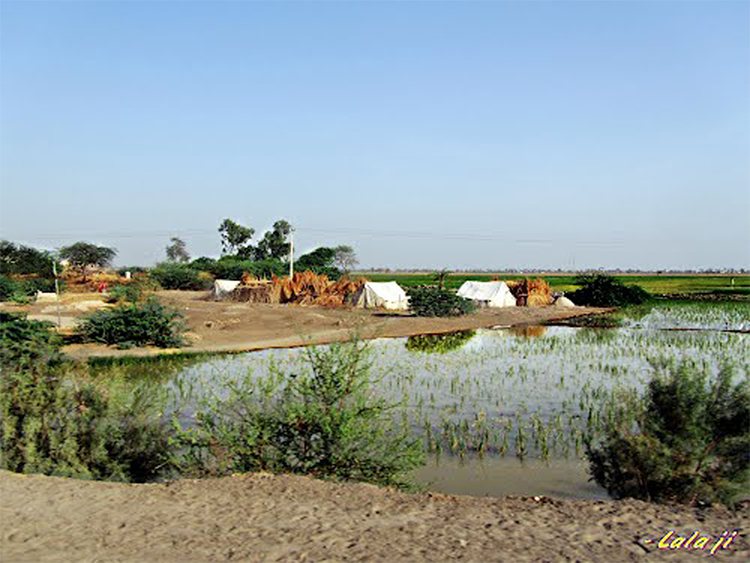 There is only one small notified forest area in Nasirabad Tehsil measuring 13 Acres.[2] There are no wildlife protected areas in the district, but the Beroon Kirthar Canal of the district is an important wintering ground of migratory birds and, hence, is on the list of Ramsar protected wetland.

The soil of Nasirabad district comprises silt, clay, silt loam, clay loam, and sandy loam. The soils of the canal command areas (irrigated by canals), which constitutes a large area of Dera Murad Jamali Tehsil, can be classified as sandy and loamy soil, with more loamy soil in dense agricultural fields. In the Chattar Tehsil, the area is sandy and clay loam.[3] 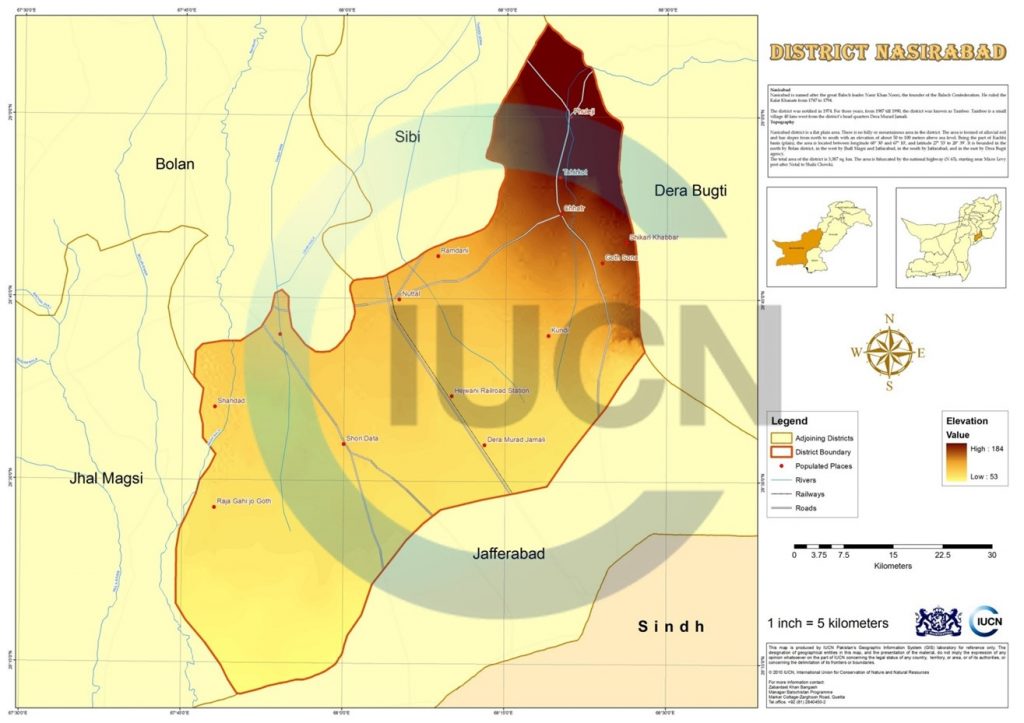 The climate of the district is extremely hot with long summers, and pleasant to cold winters. Humidity increases in the summer, particularly in the area adjacent to the Pat Feeder Canal. Dust storms are common in the summer season and they blow from the north and west; however, they have lost their intensity due to an increase in vegetation frequency. A dust storm in Nasirabad can sometimes be followed by rain. Rainy season occurs mostly during the monsoon, in the months of July and August.

The summer season starts in May and continues till the end of October. April is mild-hot, whereas the hottest months are May, June, and July. The mean maximum and minimum temperatures in June (the hottest month) are 43 °C and 29 °C. The winter season is mild and pleasant, with January being the coldest month. The mean maximum and minimum temperatures during January are 9 °C and 4 °C.

The mean annual rainfall for the district is 420 mm.

[1] The names of the streams have been extracted from Balochistan District Gazetteer Series, Sibi District, text compiled by A McConaghey

The following table shows the population of Nasirabad district as per 2017 Census:

The main economic occupations of the district include[1]:

Livestock breeding is the second most important sector of the economy. It is the main source of income for nomadic families. The following table shows the position of the livestock population according to the 2006 Census of Livestock, (qtd. in Balochistan Development Statistics 2018-19):

There are 03 government-owned poultry farms[1] in the district.

Bee keeping is not taken up as an economic activity in the district.

Fishing is carried out in the Pat Feeder Canal and its branches. The fishing industry can be further developed by constructing Fish Ponds.

The following table shows the type and number of industry for which NOCs have been established as well as the actual working industrial units:

In addition, there are other industrial units operating in the district which are not located in the Dera Murad Jamali Industrial Estate. These are:

There is no mineral potential in the District, and Oil and Gas is being explored.

The only handicraft of the district is embroidery work, which is done by women and girls for personal use; very few articles, however, are marketed.

According to the Balochistan Development Statistics 2018-19, the road statistics of the district are as follows: 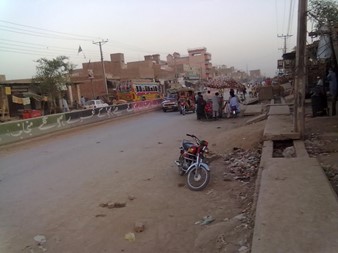 There is a Helipad in the district but no commercial airport. The nearest airport is Jacobabad International Airport. 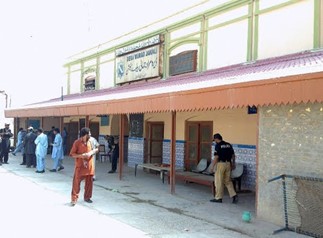 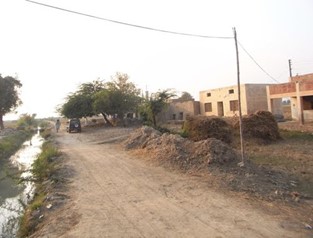 There is no radio or TV station or even a TV booster in the district. TV is viewed through a booster installed at Shikarpur. However, radio is a major source of entertainment.

The district is connected to other parts of the country through telephone and telegraph. There is 01 telephone exchange in Nasirabad district which provides 671 landlines, 407 V‑Phones and 1,302 broadband connections in the district (Balochistan Development Statistics 2018-19). Cellular phone companies also provide their services in the district.

There are 2 post offices[1] in the district. Most of the courier services also provide services.

The following banks all have their branches[2] in the district:

In all there are 07 branches of different conventional banks but Islamic banks are not operating in the District. 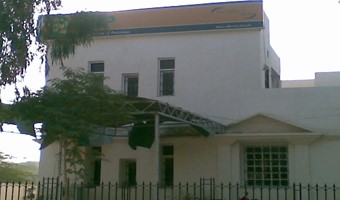 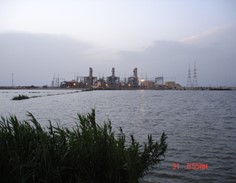 [1] List of Reporting Bank Branches 2019, by State Bank of Pakistan.

The literacy rate of Nasirabad district is only 12.7% with 12.3% males and 3.3% females being literate. The following table shows the number of primary, middle, secondary, and mosque schools in the district as per Balochistan Development Statistics 2018-19:

The following table shows the government healthcare institutions in Nasirabad district as per Balochistan Development Statistics 2018-19:

For the purposes of administration, the district is divided into two areas: “A” and “B”. The urban areas of Nasirabad district come under “A” area and the rest of the area of the district falls in “B” area. “A” area is controlled by a regular police force headed by the Deputy Superintendent of Police (DSP). This DSP is assisted by a Station House Officer (SHO), Inspector Police, and other staff. “B” area is controlled by levies force. Levies are a conventional force to maintain law and order. In levies, men of different tribes are employed. The levies force comes under the direct control of the Deputy Commissioner. Generally, the levies force is well equipped to deal with the law and order situation in the district.

The policing of Nasirabad district is looked after by the Regional Police Officer (RPO) Nasirabad. This RPO is assisted by 4 SubDivisional Police Officers (SDPOs) stationed at Dera Murad Jamali, Manjhoo Shori (Tamboo), Chattar, and Baba Kot. In all, there 09 police stations[3] in the district.

[3] Table no. 19.7 (a) Number of Police Stations by Division/District 2019 by Federal Bureau of Statistics.

There is little environmental pollution in the district, as it lacks an industrial set-up or factories. Traffic is limited to the areas along the highway, particularly near Dera Murad Jamali city. The rest of the area is free from smoke and air pollution.

The types of vegetation zones[1] in the district and the types of flora for each zone are as follows:

The Beroon Kirthar Canal area is an internationally important wetland of the district, and is protected under the Ramsar Convention. The area consists of a complex of permanent and seasonal freshwater lakes and marshes along the Kirthar Canal, near the western edge of the Indus River flood plain. The wetland is fed by Monsoon floods and excess irrigation water from adjacent agricultural land. The depth of water fluctuates widely according to water supply, and can be as much as 2 m. A large number of migratory water fowl come to this complex. Some of these include cormorants, egrets, teals, purple swamp hens, coots, black-winged stilts, some unidentified ducks, birds of prey like osprey (a fish eating hawk), houbara bustard, cream coloured coursers (endangered), and sand grouse.