Balochistan province is located at the southeastern edge of the Iranian plateau. It is a strategic bridge between the Middle East and Southwest Asia, and Central Asia and South Asia, and forms the closest oceanic frontage for the landlocked countries of Central Asia. The total area of Balochistan is 347,190 km2 (134,051 miles2), which is approximately 44% of the total land area of Pakistan. The population density in the region is very low due to the mountainous terrain and scarcity of water. The southern region is called Makran. The central region is called Kalat. Topographically, the province is an extensive plateau with rough surfaces divided into basins by mountain ranges reaching height sufficient to form obstacles to movement. It is separated from the Indus plain by the Suleiman, Kirthar, and Pab Mountain Ranges. The Balochistan plateau is a continuation of the geological configuration of the Iranian plateau and about 50% of the mountain ranges are of those found in southern Iran.

There are 4 major topographical regions in Balochistan. These are: 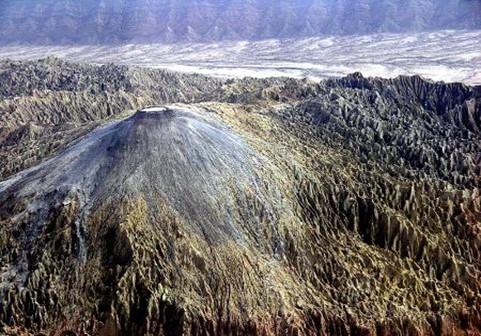 Figure 1.6 A mud Volcano of Balochistan 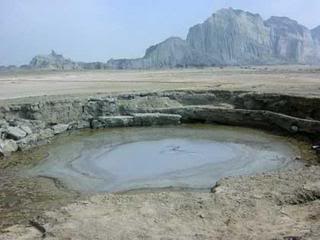 The coastline is about 760 km long, with a number of peninsulas and promontories.[4] The coastal area is not effectively connected with the interior; steep hills rise abruptly beyond the narrow coastal plain. Ports, such as Somiani, Pasni, and Gwadar are all unsheltered.

Notable mountain passes[5] of the province include:

All rivers and streams are part of 3 major drainage systems. These are:

The flow in rivers is typified by spring runoff and occasional flash floods. The riverbeds are dry, and look like small streams. Stream gradients are high, and the rate of runoff is very rapid. The Zhob River Basin drains toward the northeast into the Gomal River, which ultimately joins the Indus River. Streams along Balochistan’s border with Punjab and Sindh flow toward the east and southeast into the Indus River. Streams and rivers in central and western Balochistan drain toward the south and the southwest into the Arabian Sea. Some areas located in Chagai, Kharan, and Panjgur districts drain into playa[7] lakes, locally called Hamun as in Hamun-e-Lora and Hamun-e-Mashkel.

There is only one Perennial Lake in Balochistan, called Hanna Lake in Quetta. The other lakes are all seasonal, and are called Hamuns. The notable ones are:

In Panjgur district, there are a large number of seasonal lakes including Panjgur Lake (also called Isa-i-Ab), and Shakarak. Another seasonal lake of the province is Zangi Nawar Lake, in Nushki district. In addition, there are a number of wetlands of international importance, only some of which are protected under the government of Pakistan laws.

The main forest types of Balochistan are coniferous forests, scrub forests, subtropical desert forests, riverine or bela forests, and mangrove forests. The coniferous forests occur at an elevation of 1,500-3,500 m and include the chilghoza (pinus gerardiana) forests and Dry Juniper (juniperus excels) forests. The province has one of the largest areas of Juniper forests in the world; they cover approximately 141,000 HA, and are believed to be the oldest in the world.[8]

The following table shows the type and area of forests of Balochistan as per Balochistan Development Statistics 2018-19:

The soils of the province are derived from limestone, sandstone, and shale. On the mountain peaks and upper slopes, generally 75% of the surface is bare rock. At the foot of the mountains, gravelly fans and terraces are found, with older soils having a gravelly structure. The soils of the piedmont plains are generally deep, free-draining loams and silty loams, with occasional patches of clay and sandy loams. Most of the potentially arable soils are confined to the piedmonts and river plains, where the soils are generally fine textured and deep.

The climate[9] of Balochistan is generally arid. Since the province includes varied natural divisions, like upper highlands, lower highlands, plains and deserts, differences of climate are also extreme. Generally, the climate is temperate, or otherwise in proportion to local elevation above sea level. Climate conditions similar to those of Sindh prevail in the plains and lower highlands, but in the upper highlands, the seasons of the year are as well marked as in Europe. Climatically, according to aridity, the province can be divided into 4 zones:

Based on the climatic and edaphic[10] factors, the province can be broadly categorized into 4 Agro-Ecological Zones as follows:

The entire Balochistan province lies outside the influence of the Monsoon, and rainfall is scanty and uncertain.

Most of the province is located in Zones 2A and 2B of the Seismic Zone Map of Pakistan, which means minor to no damage or minor to moderate damage due to earthquakes. However, Loralai, Kharan, Kalat, Zhob, Sibi, some parts of Gwadar, Pasni, and Lasbela districts fall in Zone 3, which means moderate to severe damage due to earthquakes. Quetta, and parts of Muslim Bagh as well as Kharan district belong to Zone 4 which is a severe damage zone.

[1] Volcanic Complex is a compound volcano consisting of related volcanic centers and their associated lava flows.

[2] Himalaya to the Sea: Geology, Geomorphology, and the Quaternary. John F Shroder

[3] Mud Volcanoes are formed where there are deep deposits of oil and gas below the surface.

[4] A highland that juts out into the sea or a large lake beyond the coastline.

[7] Playa lakes are round hollows in the ground, and are seasonal in nature

[10] Edaphic conditions are based on soil conditions like texture and drainage.