Table 1.1 Washuk District at a Glance

Washuk district was a Tehsil of Kharan district till 2005, when the Tehsil was upgraded to a district. Hence, the early history of the district is synonymous to that of Kharan, and has been recounted in the chapter on Kharan district.

According to the Balochistan District Gazetteer Series Kharan 1907 (p. 181), the name Washuk is said to be a corruption of the words Wab Shut or Khwab Shud meaning “he slept”; tradition recounts that the district’s founder, Malik Dinar, a Syed,[1] could not sleep when journeying from Bampur until halting at Washuk (which was a desert at that time) where he fell sound asleep, and on awaking, announced his intention of permanently settling there. The area is also known as Khashuk.

Malik Dinar’s descendants remained in sole possession of the area until the nomadic tribe called Halazai started coming into the area. The Halazais were allowed to settle in the region, but in time, dissension arose between Malik Dinar’s tribe and the Halazais. The tribes asked the Kharan Chief, Mir Abbas (a Nausherwani) for help. Mir Abbas agreed to help, but over time, he gradually absorbed the area into his own territories, and made it a part of Kharan.

On 17 March 1948, Kharan acceded to Pakistan, and on 3 October, 1952 it joined the Balochistan States Union. The State was dissolved on 14 October 1955, when all regions of the western wing of Pakistan were merged to form the province of West Pakistan under the One Unit Policy. When West Pakistan was dissolved in 1970, the territory of the former State of Kharan was organized as Kharan district of the province of Balochistan.

At the Federal level, Washuk district is allocated a set number of representatives in both the National Assembly and the Provincial Assembly:

Under the Local Government Act 2010, Amended in 2011, Washuk district has 1 District Council with 10 Union Councils. It has 1 Municipal Committee as follows:

Each Union Council is represented by 1 member in the District Council. In addition, there is special representation of women (33%), and of workers and peasants (5% each).

Washuk district covers an area of 33,093 km² and is subdivided into 3 Tehsils named after their major towns:

There are a few ancient dams in the district called Zoroastrian dams or Gabarbands in the Siahan Ranges. These dams are terraced fields and built to contain rainwater in the terraced plots and collect the deposition of fertile alluvium on the otherwise rocky soil.

There are some domed mausoleums in the district called gumbals. These are Persian Tombs and are a square chamber surmounted by a dome. There are several gumbals in the district; of these, the Bibi-i-Gumbad is attributed by local authorities to Malik Bahram Shah. Another of these is known as Chandiani Gumbad. Both these gumbals are located in Washuk Town. There are other lesser known gumbals in Hurmagai.

The tomb of Malik Dinar is a historical shrine located on top of the Raskoh hills. The shrine is known as Langar-i-Malik. 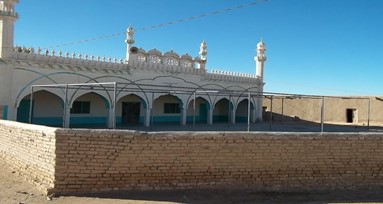 Figure 1.7 A Jamia Masjid in Basima

[2] This seat is shared by Kharan and Panjgur districts

The district is generally mountainous, with the Siahan Range of mountains separating the Rakhshan Valley of the district from Kharan, and eventually joining the hills of Iranian Balochistan[1] or Makran. The Siahan Range consists of 2 ridges:

According to the Kharan District Gazetteer (p.178), running parallel to the Siahan Range and to its north is a range called Cher Dem Latt. This range is divided into 2 parts by the gap made by Washuk Town. To the east of Washuk, the hills again form 2 parallel ridges, with the northern ridge known as the Togoruk (938 m) and the southern known as Liddi.

The plains along the hilly areas are mostly gravel plains which are formed by the accumulation of stones/ pebbles carried by hill torrents after heavy rains; these pebbles are spread over large areas.

The desert area occupies the northern and central parts of the district, and runs from Hamun-i-Mashkel (the largest desert lake of Pakistan) on the west to the Garr Hills in the east.[2] It is bisected by the line of Boddo River and chains of Nawars[3] at its extremity. The general name of the tract is Registan or Lut (desert). This desert is formed by the accumulation of wind-borne sand, in large masses, formed into crescent shaped dunes.

Figure 1.3 A Camel Caravan through the Desert, Basima

The River Rakhshan rises at the Nidoki Pass, southwest of Shireza in district Washuk. Under the name of Nag and flowing southwestward, it unites with the Lop stream[4] at a point to the west of Nag-e-Kalat in Basima Tehsil. It then flows in a west-to-south, then western direction, through the center of the long valley comprising the Panjgur district, Makran, parallel with the Siahan Range on the north and the Zangi Lak hills on the south. As it flows through Rakhshan, it has little to no water.

Other smaller streams in the district are Baddo and Mashkel.

There are a large number of hill torrents, all of which rise in the Siahan Range; these are Gujar, Zahragan, Regintak, Gresha Kaur, Palantak, Pilin, and Bibi Lohari. 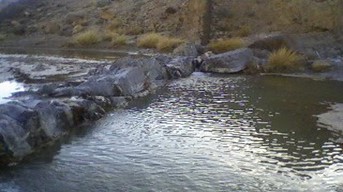 Figure 1.4 A Spring in Basima 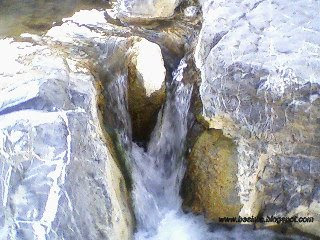 Figure 1.5 A Hill Torrent in Washuk

Separate statistical data for Washuk district is not available, but it is known that the district is home to olive pistachio forests and Desert Forests consisting of kandi, ghaz, ber, mazri, haloxylon, and gugal.

The soil of some areas of the district is alluvial and extremely fertile. The best type is called matt. It requires less water and retains moisture for longer periods and is thus, suitable for all crops.

Snow falls on the peaks of the Raskoh Hills.

Since there is no meteorological station at Kharan, the 30 year record at Dalbandin (the nearest station) has been taken. This record shows annual precipitation of 81 mm.

[1] Also called Persian Balochistan, the Iranian Balochistan is part of the Sistan province of Iran and is located in the southeast of that province

[6] Taken to be the same as Kharan district

The following table shows the population of the district according to 2017 Census:

[1] Data for areas of tehsils is not available

The main economic occupations of the district are[1]:

Livestock is also a very important sector of the district’s economy. It is the main source of income for nomadic families. In absence of data for Washuk district, following table reproduces the livestock position of Kharan District as per Livestock Census 2006 (qtd. in Balochistan Development Statistics 2018-19):

Indigenous livestock breeds of the district include kharani camel, khurasani and morak goat, and rakhshani sheep.

There are 11 poultry farms[2] in Kharan district (no separate data for Washuk is available).

There is no fishing activity in the district.

Only wild honey is locally used in the district, and bee keeping is not a commercial/ economic activity mainly due to scanty flora of the region.

The following table shows the mode of irrigation and area being irrigated by the mode for the district (Balochistan Development Statistics 2018-19):

Shabok Delay Action Dam is being built in the district.

According to the IUCN Website,[2] there are 13 karezes in Kharan district, and some of these are presumed to be providing water for irrigation to Washuk district[3] also.

There are no industrial units in the district.

The handicrafts of the district are embroidery on clothes and sandal/ shoe making as well as embroidery of leather.

[2] Table 17, Number of Commercial Poultry Farms and Number of Birds by Size of Flock

The following table shows the road statistics for Kharan/ Washuk district as per Balochistan Development Statistics 2018-19:

Some of the important roads of Washuk district include:

Washuk is not connected with any railway line and there is no airport. The nearest airports are Panjgur and Kharan Airports. The nearest railway stations are at Chagai and Quetta.

There is no radio or TV station in the district, but TV can be viewed through cable, and radio broadcasts can also be heard. Radio is a major source of entertainment especially in the rural areas.

The district is connected to other parts of the country through telephone and telegraph. There is 01 telephone exchange in Washuk district which provide 836 landlines, 1,198 wireless phones, and 759 broadband connections in the district (Balochistan Development Statistics 2018-19). Cellular phone companies also provide their services in the district.

National Investment Bank Ltd. is the only bank[1] operating in Washuk.

In 2019 as per “District-wise Scheduled Banks Branches as on June 30th, 2019” by State bank of Pakistan there were 3 bank branches in Washuk District.

Quetta Electric Supply Company (QESCO) looks after the supply and transmission of electricity to the district.

The larger part of Washuk district is bifurcated into an “A” and a “B” area. The “A” area, comprising towns and highways, has a police force. Generally, a police station has a jurisdiction of a maximum 8 km radius. A “B” area does not have a police force, and all major law and order situations are dealt with by levies.

A levy is a conventional force for maintaining law and order and was installed during British rule. Levy members are recruited along tribal or clan lines. The levies fall under the direct command of the Deputy Commissioner (DC), with powers delegated to the assistant commissioners, and tehsildars, among others. The levies in Washuk district are classified as Sepoy, Hawaldar, Dafeedar, Jameedar, and Risaldar. Every district in Balochistan has its own levies, named after the district. Recently, at the initiation of the DC administration, a new levy force has been recruited on the district level, known as the Task Force. This Task Force is better trained and equipped with advanced weapons. 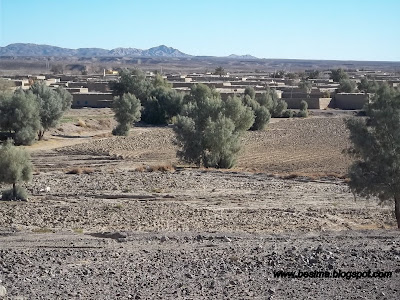 [3] Separate data for Washuk district is not available

[6] Table no. 19.7 (a) Number of Police Stations by Division/District 2019 by Federal Bureau of Statistics.

The vegetation zones[1] of Washuk district consist of the following: