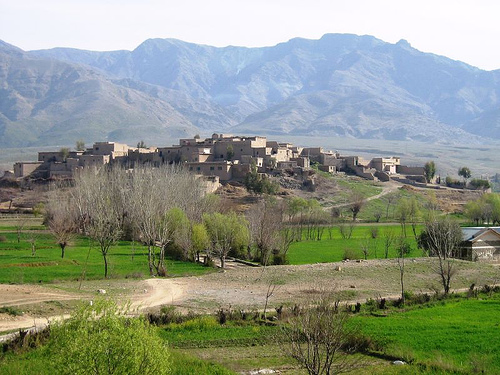 The original inhabitants[1] of Tirah were the Tirahis, who were probably a Tajik race. They were ruled by different rajas (kings) and were driven out of the country by the Pir-e-Roshan,[2] or the “the apostle of light”. Most of them fled to Nangrahar (Afghanistan) when Pir-Roashan conquered the region. In 1619 or 1620, Mahabat Khan, the Subedar (Governor) of Kabul under the Mughal Emperor Jahangir, massacred 300 Daulatzai Orakzai, who were Roshnia converts; later, Ghairat Khan (a commander in the Mughal force) was sent with a large force via Kohat to invade Tirah. The Mughal force suffered great losses and was defeated.

After Emperor Jehangir’s death, in 1627, most of the Afghan tribes revolted against Mughal domination. Muzaffar Khan (a Commander in the Mughal army), for example, was attacked by the Orakzais and the Afridis, and Abdul Qadir (a Roshnia follower) attacked Peshawar. However, Abdul Qadir had to abandon his siege due to the jealousy of Afghans, and returned to Tirah. The Mughals sent a fresh force against the Roshnias, Yousafzais, and the Orakzais. This time, the Mughals were successful, and the tribes submitted to Mughal rule again. In 1658, the Orakzais again revolted but were induced to submit. This time the Mughals granted them lands near Panipat (Bhopal Area).

Dost Muhammad Khan of the Orakzai tribe became the founder of the State of Bhopal India (now in Madhya Pardesh), and his descendants were remained the Nawabs of Bhopal.

After the downfall of the Mughal Empire, Tirah became virtually independent, though it owed a nominal allegiance to Kabul at times. During the Great Pathan Uprising of 1897-98 against British dominion, the Orakzais also revolted against the British thus giving a chance to the British to enter their territory. The Orakzais attacked the Samana, and the Afridis attacked Landi Kotal as well as other posts in the Khyber Pass. The British dispatched 34,500 men into Tirah, led by Sir William Lockhart. The British troops advanced across the Khanki and Mastura valleys, over the Sampagha and Arhanga passes to Maidan and Bazar, whence the whole of Tirah was overrun. After the end of the campaign, British forces returned to Peshawar via the Bara valley in December.

At the time of Partition, the area now forming Orakzai TD was part of Federal Region Kohat (FR Kohat) and remained so till 1973, when it was declared a separate Political Agency. This was done due to the demand of people of this area for a separate administrative structure that could bring rapid development. Initially, Dabari area of Upper Orakzai Tehsil was selected as the headquarters for Orakzai Agency. However, the people of Dabari did not give land for the construction of government buildings; therefore, Kalaya was selected. When this choice was rejected by the inhabitants, Hangu City of Hangu district was made the headquarters of Orakzai Agency. To-date Hangu City is the headquarters of the TD

At the Federal level, Orakzai Tribal district is allocated a set number of representatives in both the National Assembly and the Provincial Assembly:

Under the Local Government Act, the Tribal District has 46 Councils, which include 42 Village and 04 neighbourhood Councils.

[2] Pir-e-Roshan was an Afghan warrior poet and freedom fighter. He founded the Roshnia Movement which gained many followers in the 16th century Pashtunistan region.

Some of the important and ancient buildings which need government protection for their preservation are: (Study on Tourism Potential of FATA by FATA Development Authority)

In addition to the above historical places, other sites of interest to a tourist are:[2] 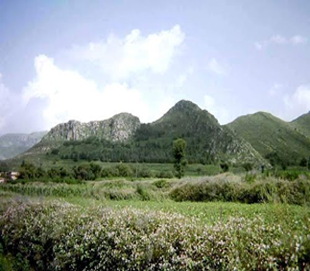 [2] Study on Tourism Potential of FATA, by FATA Development Authority.

Orakzai TD is a hilly region[1] with fertile valleys. The elevation of the hills varies from more than 3,000 meters in the west to less than 2,000 meters in the east. These hills are dominated by the mountains of Karagh Ghar Range (also spelled as Kahu Ghar), a spur of Safed Koh, dissected by numerous water courses. The hill ranges are densely covered with low brush wood. Occasional groves of pines are also found along these ranges. These hills are interspersed with passes. One of the more important passes is the Lozaka Pass.

The TD consists of small plains with a low gradient on both banks of the River Mastura. These plains are further subdivided by streams joining the main Mastura River. The main valleys/ plains are the Khanki, Mastura, Kharmana, and Bara.

There are 2 main rivers draining the TD—these are the Mastura and the Khanki. Mastura River runs east to west, and joins the Bara River. Both these rivers are fed by numerous smaller streams many of which are seasonal. Some smaller streams of the TD include the Kharmana, Kandi Mishti, and Kundi Nadi. Most of the streams take the name of the place they drain.

The soils of the TD are residuum colluvium[3] from shale, limestone, and sandstone. The soils are shallow/ moderately deep, well-drained, moderately to strongly calcareous, coarse to medium textured (gravelly sandy loam, and clay loam) and moderately eroded. These occur on lower to middle mountain slopes. Piedmont soils are gravelly loam.

The TD can be ranked as being a cold-temperate region with mild rains.

The climate of the TD is pleasant in summer and extremely cold[4] in winter. The summer season begins from May and lasts till October. June, July, and August are the hot months. The mean maximum and minimum temperatures during the month of June (which is the hottest month) are about 40 °C and 27 °C respectively. Winter begins around November and continues till April. December, January, and February are the cold months. January is the coldest month, with mean maximum and minimum temperatures of about 18 °C and 6 °C respectively. The annual rainfall ranges between 250 to 500 mm. The relative humidity ranges from 25 to 85 percent.

The TD belongs to Zone 2B of the Seismic Zone Map of Pakistan, which means minor to moderate damage due to earthquakes.

[3] Residuum soils are those that are formed by the weathering effect on limestone and dolomite bedrocks. Colluvium soils are loose, unconsolidated sediments.

[4] There is no meteorological observatory in the area; however, climatic data recorded at Kohat has been taken as a close proxy.

The following table shows the population of the TD as per the 2017 Census:

[1] Fields have been left blank where no data is available

The local economy[1] is based on subsistence level agriculture, livestock breeding, and small businesses conducted locally. People mostly seek employment in other areas of the country or outside Pakistan.

[1] Employment by Industry numbers for FATA are not available

The major sources of irrigation[1] in the TD are privately-owned and dug water channels which bring water to the farmlands. The following table shows the mode of irrigation system used and area irrigated by each (KP Development Statistics 2020-21):

[1] Data on Agro-Ecological zones of FATA is not available

Apricots, apples, peach, walnut, pear, citrus, ber, and olives are some of the fruits grown in the TD.

Livestock farming is a dominant occupation of the farming community with more than 15 million animal heads and about 22 million poultry birds’ habituating the KP Province. However, this occupation is mostly to supplement family nutritional and cash requirement. The capitalist trend in this sector is still lacking, resulting in weak and non-descriptive breeds with low level of milk and meat productivity.

Balki, Tirah, or Afridi sheep are the indigenous breeds of cattle of the Agency.

Table 17 (Number of Commercial Poultry Farms and Number of Birds by Size of Flock) does not include data on number of commercial poultry farms in Orakzai TD.

The various rivers and streams[1] that traverse the TD harbour a variety of fish, depending on the climatic regime. Cold waters in the upper reaches, for example, are suitable for trout, while warmer waters in the lower reaches favour carp. These aquatic resources are ideally suited for the development of fisheries.

Fishing is carried out in the streams, rivers, and lakes, but most of this fish is consumed locally.

The mountains of the Tribal Areas[2] yield a variety of minerals, ranging from marble and granite to copper and gold. Since mineral extraction depends heavily on labour, the mining industry can serve as an immediate means to create employment in the region. Considering the reserves that have already been identified, the sector has the potential to become a major employer in the long term.

At present, coal is the only mineral being commercially mined in Orakzai Tribal District. Mineral potential includes copper, and stones like marble.

There are no industrial zones/ estates in Orakzai Tribal District, but there are 170 registered industrial units, of which 136 are working in the region. There are 169 Coal Extraction Units and 1 Stone Crushing Unit in the TD.

Household items made of the leaves of the mazri palm are the main handicrafts of the TD. Other items include embroidery on clothes, and the raising of silk worms.

There are two types of roads in Orakzai TD: High type and Low type. The following table shows the road statistics as per KP Development Statistics 2020-21:

Important roads of the district include:

There is no Railway station in the TD, nor is there an airport.

According to the KP Development Statistics 2020-21, there are 04 telephone exchanges in Orakzai Tribal District. These exchanges provide 464 connections. In addition, private cellular companies provide their services in the region.

According to KP Development Statistics 2020-21 there are 09 branch post offices in Orakzai Tribal District.

There are a total of 03 Branches of Habib Bank Ltd., operating in the Tribal District (KP Development Statistics 2020-21).

The total literacy rate of Orakzai TD as per the Pakistan Social & Living Measurement Survey 2019-20 is 37%. Male literacy rate is 85%, while female literacy is 10%. The following table shows the number of government educational institutions in Orakzai Tribal District (KP Development Statistics 2020-21):

In addition there are 134 Private Medical Practitioners[1] in the Agency.

The District Police Officer (DPO) is directly responsible to the District Mayor for public safety. The Police Department is headed by the Senior Superintendent of Police (SSP). The SSP supervises and controls the police force in maintaining law and order, and investigation of cases of a criminal nature. The Police Department operates under the Police Rules. There are 02 Police Stations in the District. (KP Development Statistics 2020-21).

The Levy Force, Khassadars and the Scout Troops operating in the erstwhile Orakzai Agency have been absorbed into the KP Police as per the KP Levies Force Bill 2019

The ambient air quality in the Tribal District is excellent due to minimal sources of air emissions. The only source of impact on the quality of the ambient air is the rare vehicular traffic on the roads, which causes some dust emissions whose impact is localized. The main pollutants from vehicle exhaust are lead, particulate matter, carbon monoxide, sulfur dioxide, and nitrogen oxides. These emissions temporarily affect the air quality in the immediate vicinity of the roads.

Endangered wildlife of the region includes nearly all of the mammals and birds found in the TD.