Sindh has the 2nd largest economy in Pakistan. Historically, Sindh’s contribution to Pakistan’s GDP has been from 30% to 32.7%. Its share in the Service sector has ranged from 21% to 27.8% and in the agriculture sector from 21.4% to 27.7%. Performance wise, its best sector is the manufacturing sector, where its share has ranged from 36.7% to 46.5% of the total GDP of Pakistan.

Following are the major economic sectors of the province[1]:

Sindh is a major producer of grain, fruits, and vegetables. The province produces 35% of rice, 28% of sugarcane, 20% of cotton and 12% of wheat of the total produced in Pakistan[2]. 30 to 50% of Pakistan’s vegetable crops and 12 to 50% of fruit crops are also grown in Sindh. 40% of all onions, 81% of all chilies and 35% of all tomatoes produced in Pakistan are grown in Sindh. According to the climatic and soil condition of the province, different areas are suitable for different crops, details of which follow.

The Upper Sindh and Right Bank areas of the Indus River are most suitable for crops. Larkana, Shikarpur and Jacobabad are suitable for growing rice as the main crop, and peas, rape, mustard and safflower/sunflower as dobari[3] crops. Sukkur and Khairpur districts are best suited for dry crops like cotton, wheat, rape, mustard, and sunflower.

The lower part of the province is best for sugarcane, coconut, bananas, and papaya plantations. The Upper part of Hyderabad (Hala, Hyderabad and Tando Allah Yar Sub-Division), Sanghar, and Mirpurkhas districts are suitable for cotton, wheat, sunflower, soybean, rape and mustard and groundnut (in Sanghar only). Tando Mohammad Khan, sub-division of Hyderabad district, Badin, and Thatta districts are suitable for sugarcane and rice crops. In addition to these crops, sunflower, and rape and mustard are also grown as dobari. Maash and masoor pulses are grown in Thatta and Badin districts.

The Eastern portions of the province and Kacho areas are suitable for rain-fed crops like millets and guar. Thar district and Kacho tracts of Hyderabad, as well as Dadu and Larkana districts are suitable for millet and sorghum crops, while guar, sesanum, and caster crops also flourish very well in the desert areas of Thar after rains.

In addition, a large variety of fruits and vegetables are grown in various districts of Sindh.

The following map shows the Agro-Ecological zones of Sindh province: 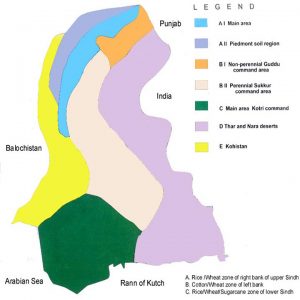 Agriculture, followed by forestry, is the main land use in the Central Alluvial Plain. The land inside the Indus embankments is almost equally employed by agriculture and forestry, while that outside the embankments is more extensively utilized for agriculture in the form of sparsely distributed irrigated plantations. The following table shows the land use statistics of Sindh province as per Sindh Development Statistics 2018-19:

27% of all cattle[8], 28% of buffaloes and 40% of Pakistan’s poultry is bred in Sindh. Livestock production occupies a strategic position in the agrarian economy of the province, as well as the country, particularly in the context of economic growth. Livestock and poultry provide food of high value (that maintains the general health of the population) like milk, meat, dairy products, and eggs. Livestock also contributes by producing raw materials like raw wool, raw skins and hides, leather, animal hair, and bones, which are used to produce multiple products. Animal hair, for example, is used to make rugs, coats, air filters, and insulation material, while bones are used to make fertilizers, glass, and refined sugar, and blood is used in dyes and inks, adhesives, and medicines. This sector helps provide a source of income to landless farmers. Livestock and poultry breeding is one of the biggest industries in the province. The following table presents the statistics for the livestock population of Sindh as per Sindh Development Statistics 2012-13 which uses the 2006 Livestock Census (the latest held livestock census):

The following map shows the main livestock zones of Sindh[9]: 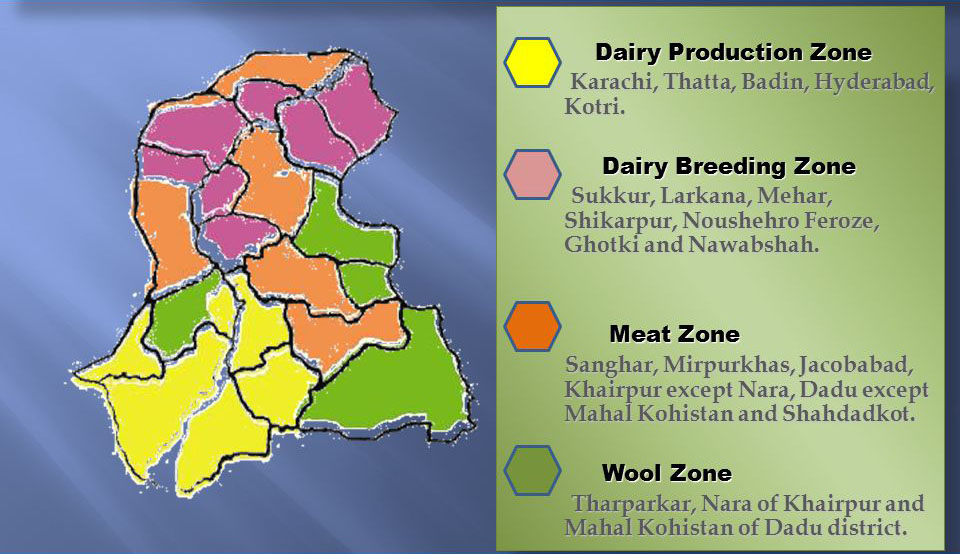 Major Livestock breeds in the province are:

In rural areas, poultry in small numbers is bred in houses by women for eggs and meat to meet domestic needs. Most of the commercial poultry farms are located around urban centers. Presently, the Poultry Industry contributes a large segment to the national economy and has become the 2nd largest industry after textile in Pakistan. In all, there are 7,290 poultry farms in the province (Table 17: Number of Commercial Poultry Farms and Number of Birds by Size of Flock).

Sindh holds a primary position in Pakistan in the fisheries industry. Of Pakistan’s 1,050 km long coastline, approximately 350 km is in Sindh. In addition to the long coastline, which provides access to the Indian Ocean, almost 100% of brackish, 65% of freshwater and 71% of marine fish resources of Pakistan are caught and processed in Sindh. Over 16,000 boats of all categories are engaged in fishing along the coast. The wetlands of Sindh serve as spawning, rearing and nursery grounds for the production of shrimp, lobsters and fish[11].

There are 3 fish harbors in Sindh:

All of these harbors are located in Karachi. These harbors provide all facilities for storage and packing of fish.

In addition to marine fishing, inland fishing is carried out in all the rivers/streams and lakes of the province.

The total area covered by these barrages is 12.815 million acres. Sukkur Barrage alone is the largest unified irrigation infrastructure in the world. The combined network of these 3 barrages includes 937 km of feeder canals, 2,501 km of main canals, 4,909 km of branch canals and 12,954 km of distributaries.

This large network is overseen and managed by the Irrigation & Power Department and Sindh Irrigation and Drainage Authority (SIDA).

Spate[1] irrigation is used in addition to the irrigation system mentioned already, in specific arid zones of Sindh. The arid zones include Thar region (Tharparkar & Umerkot) and Nara region (Sanghar, Khairpur, Ghotki and Sukkur) in the East, and Katchho and Kohistan regions (Dadu and Thatta) in the West. Specific areas cultivated via spate irrigation are Dadu, Larkana, Jamshoro, Karachi, and Thatta. In Pakistan, as per irrigation data of 2005, total area under spate irrigation was about 8.2% of the total irrigated area. Separate data for Sindh is not available.

The Kirthar Range, a mountainous region of the Kohistan area, and parts of the Dadu division receive isolated small scale hill torrents, which are diverted for runoff farming. The exact area under runoff farming is not known due to the scattered nature of this type of farming. However, it is significantly more when compared to rain-fed farming in the province.

Tube well and dug wells are also used for irrigating lands. The following table shows the modes of irrigation and area of the province irrigated by each mode[2]:

The following map shows the irrigation system of Sindh in detail:

Sindh has a total of 28 industrial zones in various districts of Sindh. In addition, there are small industry zones and some special economic zones which contribute to a thriving handicrafts and home-based small industry. The zones provide special help and incentives by the Provincial Government to promote small industries.

Sindh is very rich in minerals. The following minerals have been discovered so far in this province:

Sindh has a rich heritage of traditional crafts that has evolved over the centuries. Sindhi artisans are known for ajraks, pottery, leatherwork, carpets, textiles, and silk cloths. The chief articles produced both for domestic use and for export[15] are blankets, coarse cotton cloth (soosi), camel fittings, metalwork, lacquered, and enamel work, as well as gold and silver embroidery. Different regions of Sindh produce different types of handicrafts:

Historically, the work of Sindhi artisans was sold in the ancient markets of Armenia, Baghdad, Basra, Istanbul, Cairo, and Samarkand. The refined, lightweight, colorful, and washable fabrics from Hala became a luxury for people used to the woolens and linens of the age.

The ajra— a shawl-type cotton fabric dyed using natural dyes and decorated with traditional (geometrical) patterns—has existed in Sindh since the birth of its civilization. The color blue is predominantly used in ajraks. Sindh was traditionally a large producer of indigo and cotton cloth, and both were exported to the Middle East before the British colonization of the region. The presentation of an ajrak is a mark of respect and it is most commonly used as a gift at important festivals like Eid and occasions like weddings.

Another important Sindhi handicraft is the rilli, or patchwork quilt. Most Sindhi homes have a set of rillis—one for each member of the family, and a few spare for guests. The rilli is made with small pieces of cloth of different geometrical shapes sewn together to create intricate designs. They may be used as a bedspread or a blanket, and are often given as gifts to friends and guests.

The Sindhi cap, another trademark Sindhi handicraft, is manufactured commercially on a small scale at New Saeedabad and Hala. Markets like Karachi have a high demand for this cap, but these manufacturing sites have a limited production capacity. Traditionally, the Sindhi cap is round in shape. A portion in front is cut out to expose the forehead. It comes in 2 varieties: hard and soft. The hard variety keeps its shape when not worn, while the soft variety can be folded and put in one’s pocket. Most Sindhis, rich or poor, own a Sindhi cap. 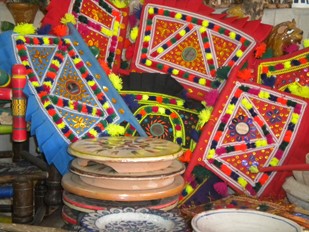 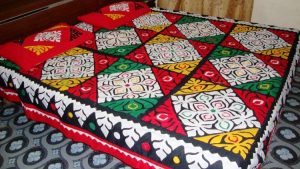 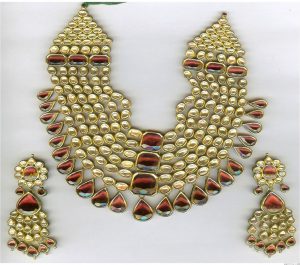 [2] State of Environment and Development IUCN 2004

[3] Dobari crops are crops sown on land which is not utilized between two summer crops of rice, from September/ October to May

[5] Net Sown means the area which has been sown at least once in a year. It will include area under crops, fruit, vegetables etc.

[6] Current Fallow means the part of the cultivated area which has not been used for crops during the year.

[7] Culturable Waste means all cultivable land not actually cultivated. It should include all grazing and other land not included under forest.

[8] State of Environment and Development IUCN 2004

[10] Names of livestock breeds derived from districts or cities/ towns are capitalized, while others are not.

[11] State of Environment and Development IUCN 2004

[13] Presentation paper in Oil and Gas Conference 2007. This mine has only recently been discovered, and remains largely untapped.

[15] Most NGOs as well as the Small & Medium Enterprise Development Authority (SMEDA) are developing a directory of all artisans to try and regulate exports and sales of handicrafts across Pakistan, in order to ensure that the manufacture and sale of the goods contribute meaningfully to the economy.