District Tando Mohammad Khan (TMK) is located between 68° 15Ꞌ 14” to 68° 44Ꞌ 2” East longitudes and 24° 45Ꞌ 41” to 25° 17Ꞌ 8” North latitudes, and is situated at a distance of 35 km from Hyderabad. It is bordered by Hyderabad and Tando Allahyar districts to the North, Badin district to the South and East, and Thatta district to the West. River Indus flows in the Northwest.

[11] Hyderabad District Statistics; 2017 Census Data has not been made public yet.

[21] Hyderabad District Statistics; 2017 Census Data has not been made public yet.

[23] Hyderabad District Statistics, 2017 Census Data has not been made public yet.

The district was part of Hyderabad district till 2005, when the existing tehsil—Tando Muhammad Khan—was designated as a district by the Chief Minister of Sindh, Mr. Arbab Ghulam Rahim. The history of the district, thus, is the same as the history of Hyderabad, and has been recounted in the relevant chapter.

The town of Tando Muhammad Khan was founded about eight years after commencement of Mir Fateh Ali Khan’s rule [1783] by Mir Muhammad Khan Talpur Shahwani. Soon after this event the lands around the town came into his possession as “Jagir.” Mir Muhammad Khan died in 1813 and was succeeded by his son Mir Karam Khan, and he again by Mir Ghulam Shah, who was killed in the battle about the time British took Sindh (1843). (p. 836)

The town became a municipality in 1856. Before the British conquest of Sindh, the town of Tando Muhammad Khan was made the headquarters/ capital of Guni Taluka, once it was founded and developed by Mir Muhammad Khan Talpur. Mir Ghulam Ali Khan Talpur (1909-1963) continued to develop the town’s infrastructure, and not only did he establish educational institutions for the provision of quality education, he also personally helped provide social services in the area. His grave is in Tando Muhammad Khan.

The name and boundary of Guni Taluka remained untouched till 1955 when the Bill for One Unit Policy was passed by the Pakistan National Assembly. This bill merged the four provinces and all districts of West Pakistan into one province which was called West Pakistan, with its capital at Lahore. In 1970, the province of West Pakistan was dissolved by the President and Chief Martial Law Administrator, Yahya Khan, and four new provinces were created, along with some changes in Pakistani Kashmir. At the time of the restoration of Sindh province, the name of Guni Taluka was changed to Tando Muhammad Khan Taluka because the town Tando Mohammad Khan was the headquarters.

At the Federal level, Tando Muhammad Khan district is allocated a set number of representatives in both the National Assembly and the Provincial Assembly:

The district has one Municipal Committee:

It has 2 Town Committees:

There are 3 Talukas of Tando Muhammad Khan district as follows:

A Buddhist Stupa (Guja) or Sudheranjo-Dar, located a few miles from Tando Muhammad Khan Town is a Protected Heritage Area under the Government of Pakistan’s laws. A square plan of the plinth, or the heavy base of the stupa, as well as the steep hard core of the superstructure have survived. The curved bricks used in the structure help date it to the Gupta era.

Tando Muhammad Khan district is part of the lower Indus plain formed by the alluvial deposits of the Indus River. The district is situated at the foot of Ganjo Takkar Hills Range that runs nearly due South, parallel to the Indus for about 22.5 km (14 miles). The hills have an elevation of just 31 meters (100 feet). Fuller’s earth[1] is mined in these hills. There are 2 small hillocks on the North of Tando Muhammad Khan town, called Budhaka Takkar. The rest of the district is fertile plain with an elevation of about 11 meters above sea level.

The River Indus flows through the district, in the Northwest. There are a few intermittent streams that flow during rainy season; these[2] include Dhadhko Wah, Mulchand Wah, Sapa Wah, and Mir Wah. There are a few small dhands/ lakes in the district. These include Chhari dhand, and Kulab lake/dhand.

Tando Muhammad Khan district is a forest deficient area. Total forest cover in the district was 620 HA up until 2011. There were 2 important forests, the Mula Katiar Reserved Forest (381 HA) and the Budhka Reserved Forest (598 HA). These forests have since been encroached upon, and converted into agricultural land.

The soils of the district mainly consist of loamy and clayey soils of older river plains and are very fertile.

The climate of Tando Mohammad Khan district is moderate. However, the summer months—April, May, and June—are very hot during the day. The mean minimum and maximum temperatures during this period are 25 °C and 45 °C respectively. December and January are the coldest months, with maximum and minimum temperatures of 30 °C and 10 °C respectively. The temperature falls abruptly at night. The climate is tempered by the West and South winds, which blow for 8 months, from March to October, making the hot weather tolerable. The autumn season starts in September and lasts for about 2 months. The maximum recorded humidity at Tando Mohammad Khan is 55%. Rainfall is highly erratic, with an annual average of 130 mm. The Monsoon dominates from July to September.

The district falls under Zone 2 A of the Pakistan Seismic Zone Map which means that there will be moderate to low damage by earthquakes.

The following table shows the population figures for the district as per the 2017 census:

The major economic activities[1] of the district are:

Nearly 70% of the rural population of the district is employed in agriculture and its allied livestock breeding as its main occupation. Main crops are cotton, rice, sugarcane, jowar, bajra, maize, wheat, barley, gram, rapeseed & mustard, moong, masoor, arhar, and maash.

The following table shows the main land use statistics of the district as per Sindh Development Statistics 2017-18:

There is a large Red Sindhi cattle breeding farm in the district, which is managed by the Animal Husbandry Department of the Government of Sindh. Red Sindhi cattle is indigenous to the North and northwestern parts of Karachi and Hyderabad, including Kohistan area (Sindh province) and Lasbella district in Baluchistan province.

Red Sindhi cow, cross-breed cattle, kundi buffalo, kamori goat, barbary goat, and thorough bred horses are native breeds of the district, as they are of Sindh. The following table shows the livestock statistics[2] for the district:

Tando Muhammad Khan district is irrigated by canals off-taking from Sukkur and Kotri Barrages. The Phulleli canal, Akram Wah, Pinyari Canal and Guni Wah are the main canals supplying water for irrigation as well as for domestic and other uses. In addition, there are 296 wells and tube wells in the district. The following table shows the mode of irrigation and area irrigated by each mode as per Sindh Development Statistics 2017-18:

Inland fishing is carried out in River Indus and the water canals of Tando Muhammad Khan district. A large number of both full-time and part-time fishermen engage in this activity in the district.

Honey-bee keeping was introduced in Pakistan in the 1980s, when IUCN and UNDP introduced apiculture in the coastal villages of Sindh, especially in Badin and Thatta. This project aims to protect the mangroves of the districts.

The district has 110 oil and gas wells which are producing oil and gas for the country. Coal has been discovered near Bulri Shah Karim Taluka and Mullakatiar Union Council. Fuller’s earth, limestone, and alum are also mined in the district.

Tando Muhammad Khan is primarily an agro-based district and thus, its industrial base is dependent on its agricultural production. This district has established industries, the raw material for which is provided by the agriculture sector. Tando Mohammad Khan is the second largest producer of Ajrak (a special Sindhi hand block-printed fabric mostly used as a shawl) in Pakistan and a small scale Ajrak manufacturing industry is well-established in this district. Sugar mills, flour mills, and rice mills as well as factories producing detergents are also operating in this district.

The following table shows the major industries and number of units[4] located in various areas of the district:

According to the official website of National Vocational & Technical Training Commission there are 2 sugar mills, 1 polymer packaging mill, 1 Distillery, and 1 cotton ginning mill in the industry[5].

The district offers unique handicrafts such as handmade carpets, and Ajraks. In addition to being the second largest producer of Ajraks, Tando Muhammad Khan is a leading producer of Soosi cotton cloth. Mats, baskets, and other crafts made of reeds and bamboo, clay, terracotta, and ceramics work are also produced in the district. Roads link Tando Muhammad Khan district with its Taluka headquarters and other parts of the country, and are the most important mode of communication. The district is linked with other parts of Pakistan via railway.

The road list issued by Sindh Government in 2009 does not contain data about the roads in Tando Mohammad Khan district, but the Sindh Development Statistics 2017-18 reports the statistics of the roads in the district as follows:

TV can be viewed through boosters and cable, and there is a radio channel called Indus FM in the district.

Hyderabad GPO is responsible for distributing mail in Tando Muhammad Khan district. There is a main post office in each Taluka of the district and branch offices in other areas.

Banks that have their branches in the district include[2]:

In all there are 18 branches of conventional banks and 1 branch of Islamic bank in the District.

Tando Muhammad Khan district gets its electricity through the grid stations and transmission lines provided by Hyderabad Electricity Supply Corporation which is a subsidiary of WAPDA and is responsible for supplying electricity. There are 2 grid stations in the district each with capacity of 132 KV.

Tando Muhammad Khan district is irrigated by canals off-taking from Sukkur and Kotri Barrages. The Phulleli canal, Akram Wah, Pinyari Canal and Guni Wah are the main canals supplying water for irrigation as well as for domestic and other uses. In addition, there are 296 wells and tube wells in the district. The following table shows the mode of irrigation and area irrigated by each mode as per Sindh Development Statistics 2017-18:

The following table shows the number of educational institutions in the district as per Sindh Development Statistics 2017-18:

In addition, there are nearly 21 private schools and 4 private colleges[4] in Tando Muhammad Khan district.

In addition, there is a Unani Shifa Khana[5] in the district.

The Provincial Police Officer (PPO) Sindh is responsible for policing the entire province of Sindh. This PPO is assisted by 6 Additional Inspector General (AIG) Police. The AIG Police Hyderabad Division is in charge of Hyderabad, Tando Muhammad Khan, Matiari, Tando Allahyar, Badin, and Nawabshah districts. The District Police Officer Tando Muhammad Khan is responsible for policing of the district. There are 3 police stations[6] in the main towns of the district. 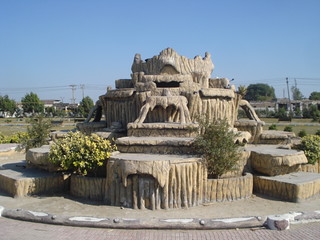 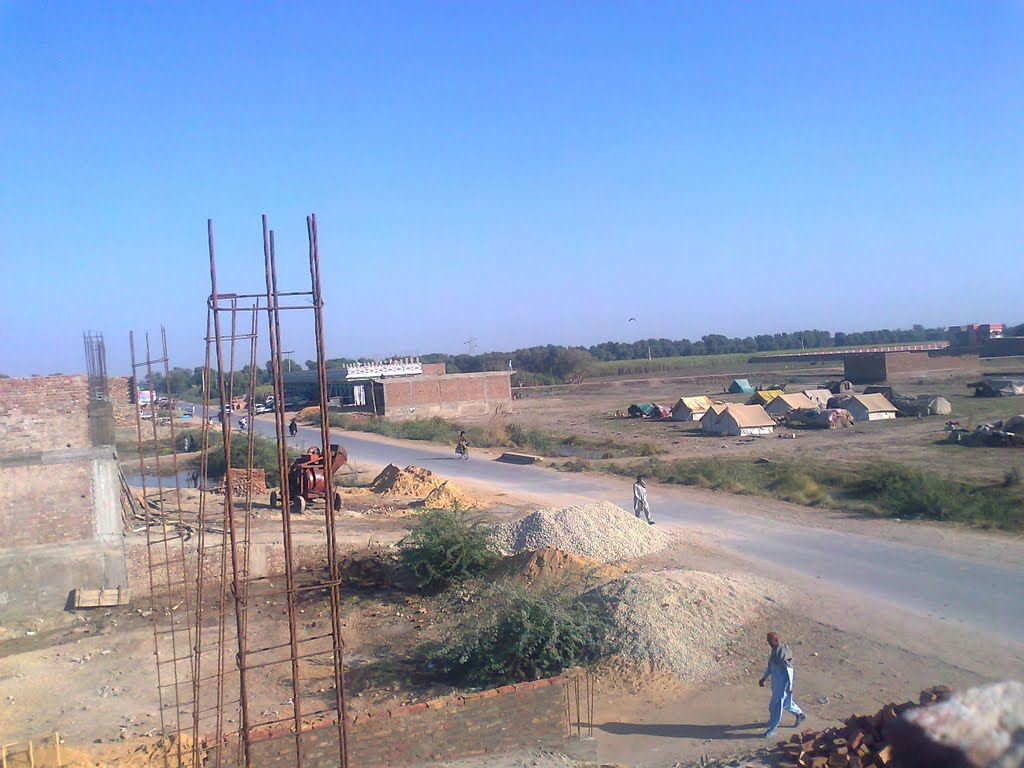 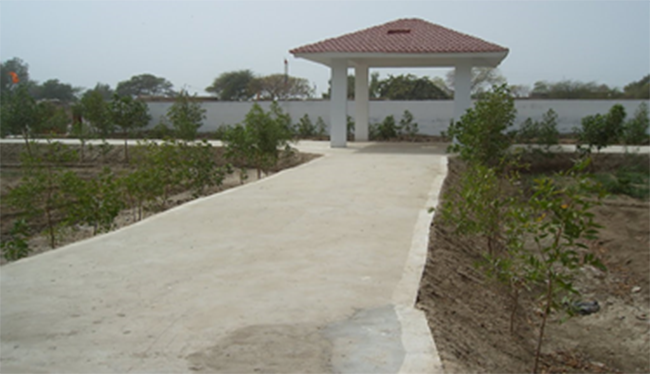 [5] Herbal Medicines are used for treatment.

[1] This includes data for Tando Allahyar, Matiari, and Tando M Khan Districts also, from 1998 Census; 2017 Census Data has not been made public yet.

The district belongs to the Irrigated Agro-Ecological Zone of Pakistan. The type of soil (sandy, loamy, water logged or saline), and the amount of moisture available mainly governs the vegetation species. Mostly, both sides of the roads are covered with thick vegetation which fulfills its water requirements from the seepage of farmlands, agricultural fields, and canals of the irrigation water network. Sweet water is available in the ground, which supports a large variety of vegetation.

Separate data for fauna of Tando Muhammad Khan is not available. At present, since there are no forests, and due to high population growth rate, the wildlife of the district is nearly non-existent. Jackals and foxes are seen in the dry rangelands. Birds of the area include black and grey partridges, buft-backed heron, Indian reef heron, Mongolian sand plover, little brown dove, cuckoo, Indian scoops owl, and Indian great-horned owl. Reptilian fauna includes Indian monitor, agama and garden lizard, cobra, and viper.

There are no wildlife protected areas in the district.

Following are some areas of interest[2] in the Tando Muhammad Khan district: