More than 160,000 watercourses comprise the distribution network that takes water directly to farms from rivers and streams.

Following are the major dams in Pakistan. For details, please refer to specific chapters on province/ district)

Barrages[1] and headworks[2] control the irrigation waters in Pakistan, in addition to the previously mentioned dams. For details please refer to individual chapters on province/ district.

The irrigation is also taken up through tube wells, dug wells and spate[3] (Rod Kohi) system of irrigation. Pakistan’s use of the spate irrigation system irrigates one of the largest areas in the world. 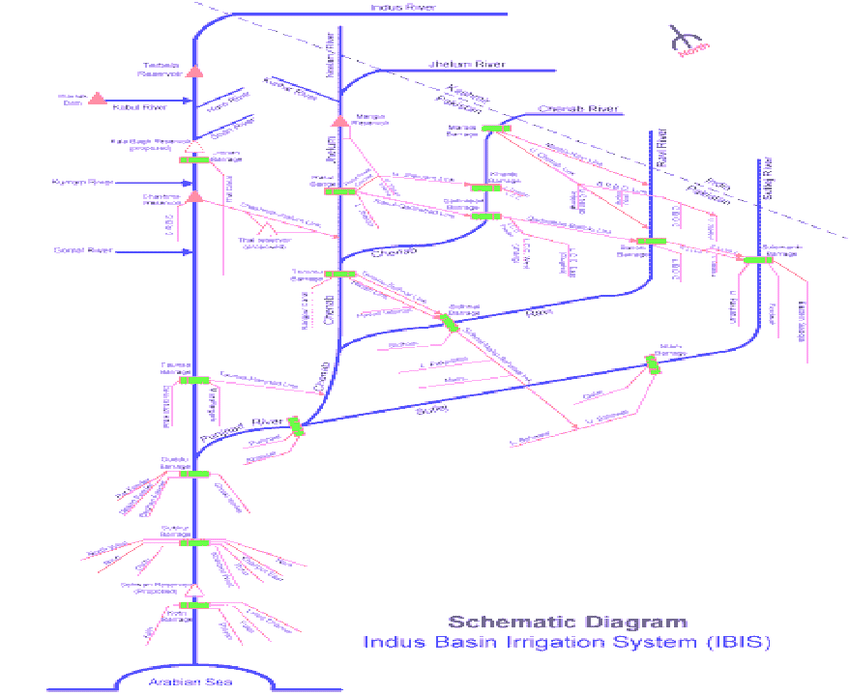 The following table shows the type of irrigation system and area irrigated by each as per Pakistan Agricultural Statistics 2017-18:

Pakistan’s principal natural resources are arable land and water. About 25% of Pakistan’s total land area is under cultivation, and is watered by one of the largest irrigation systems in the world as discussed already. Pakistan irrigates three times more acres than Russia. Agriculture accounts for about 21.2% of the GDP and employs about 44% of the total labor force. Zarai Taraqiati Bank Limited is the largest financial institution geared towards the development of the agriculture sector through the provision of both financial services and technical knowledge.

Pakistan ranks 5th in the Muslim world and 20th worldwide in farm output. It is the world’s second largest milk producer.

According to the Food & Agriculture Organization Statistics (FAOSTAT) 2018, Pakistan World Rankings in terms of net production values (Top 20 Countries Only) are being shown in the following table[5]:

Livestock breeding is an integral part of agriculture in Pakistan and provides one of the main sources of protein and energy for Pakistan’s rural population. It is widely recognized as the main source of cash income for the landless. There is an important interrelationship between livestock and farms engaged in crop production, in addition to the value of livestock as a food source and as a household asset Livestock breeding also provides both manure and draught power[7] for farming; dried animal dung is used extensively as a heat source in domestic cooking in rural areas. Demand is growing for milk, dairy products, and other livestock products in the urban centers, helping fuel livestock breeding in rural areas.

In Pakistan, farmers do not earmark any separate land for animal grazing, so herds generally graze on fallow or uncultivated lands. Most livestock is raised to meet local needs but there are some areas that specialize in breeding of animals for commercial purposes.

The last livestock census conducted in Pakistan was in 2006. The following table lists the livestock statistics of Pakistan as per this 2006 census[8]:

Important livestock breeds of Pakistan are:

Horse and Cattle Shows are held between February and March in different agricultural centers of Pakistan. The famous ones are those held in Sahiwal, Dera Ismail Khan, Sibi, and Lahore. Different performances like cattle races, cattle dances, tent-pegging, tattoo show, folk music, dances, bands, cultural floats, and folk games are the main tourist attractions in these shows.

Most of the poultry farms in British India were located in areas that were portioned over to India at Partition, leaving Pakistan with farms that bred exotic stock of breeds like White Leg Horn, Rhode Island Red, and New Hampshire, among others. These were reared in limited numbers at government poultry farms located at Lahore, Peshawar, Karachi, and Quetta.

Initially, thus, Pakistan met its entire demand[9] for eggs and poultry meat from rural poultry breeding till 1962, as poultry farming was not treated as a commercial industry, and most of the poultry farming was limited to local, individual farmers and treated as a “backyard business” to meet household needs. In the early 1960s, the need for commercial poultry was officially recognized, which resulted in the national campaign to commercialize the industry by enhancing the production of feed products in the country in 1963. Under this campaign, the Pakistani government also announced a tax exemption on the income derived from poultry farming which encouraged the establishment of commercial poultry farms in Pakistan. Pakistan International Airlines (PIA), in collaboration with Shaver Poultry Breeding Farms of Canada, established the first commercial hatchery in Karachi. Simultaneously, a commercial poultry feed mill was established by Lever Brothers (Pvt.), Pakistan Ltd., at Rahim Yar Khan, Punjab, the success of which was followed by other developers like Arbor Acres Ltd.

Bee keeping is another industry[11] which is relatively new in Pakistan, as it was non-existent prior to Partition. Honeybee colonies were introduced in the 1980s, and since then, more than 300,000 honeybee colonies have been successfully established in Pakistan. The research in apiculture[12] at the federal level was initiated by Pakistan Agricultural Research Council (PARC) in July 1976 under a coordinated program of “Honeybee Management”. After the termination of this program, the project was transferred to the non-development budget of PARC as its core activity in 1987. A full-fledged Honeybee Research Institute was established with its own building, including laboratories, in 1989. The Institute was merged into the Institute of Natural Resources & Environmental Sciences (INRES) in August 2002 and renamed as Honeybee Research Program (HBRP). The HBRP was disassociated from INRES on November 1, 2006 and merged into Institute of Plant & Environment Protection (IPEP).

Since its initiation in 1976, beekeeping[13] is a profitable business in Pakistan. About 7,000 beekeepers are now rearing exotic species, like Apis mellifera, in modern beehives. There are about 300,000 bee colonies producing 7,500 metric ton honey annually. The share of honeybees in crop pollination is 80%. It improves the quality of fruits and vegetables as well as the yield of seed crops.

Pakistan is endowed with rich fishery potential. It is located in the northern part of the Arabian Sea and has a coastline of about 1,120 km with a broad continental shelf and its Exclusive Economic Zone[14] extends up to 200 n. miles[15] from the coast. There are about 16,000 fishing boats operating in the Coastal Area of Pakistan; these operate in shallow coastal waters as well as in offshore areas. These fishing boats undertake fishing trips lasting anywhere from a few hours to about 25 days, depending on the type of fishing being undertaken. Total production from inland and marine waters is approximately 0.60 M. tons[16]. Fishery Industry of Pakistan provides employment to about 300,000 fishermen directly. In addition, another 400,000[17] people are employed in its ancillary industries. Fishery is also a major source of export earnings.

The major fish harbors of Pakistan[18] are:

Fish and fishery products are processed and exported to over 50 countries. About 30 to 35% of the fish and fishery products are exported to European Union countries. Japan, USA China, Saudi Arabia, United Arab Emirates (UAE), Malaysia, S. Korea, Hong Kong, Sri Lanka, and Singapore are other major countries that import Pakistan’s fishery products. There are 29 fish processing units in Pakistan with a total storage capacity of 10,000 tons, out of which 25 units are located in Karachi. The federal government provides intelligentsia and technical assistance to seafood establishments for improving their processing conditions to keep them in line with various EU/ International standards. Through this process, 8 establishments have already improved enough to export seafood to countries in the European Union. In addition, another 5 plants have upgraded, and others are also undertaking changes in their facilities to comply with EU/International standards and improve the export of fishery products.

The major import commodities of Pakistan are petroleum, petroleum products, machinery, plastics, transportation equipment, edible oils, paper and paperboard, iron and steel, and tea, among others.

A large percentage of the commercial activities include the sale of handicraft items such as hand-woven and machine-woven carpets for which Pakistan is well known.

Pakistan’s industrial sector accounts for about 25.5% of its GDP. Cotton textile production and apparel manufacturing are Pakistan’s largest industries, accounting for about 66% of the merchandise exports and almost 40% of the employed labor force. Other major industries include cement, fertilizer, edible oil, sugar, steel, tobacco, chemicals, machinery, food processing, electric goods, and ship building.

The major manufacturing industries of Pakistan include food and beverages, textiles (which include cloth and wearing apparel), iron and steel products, industrial chemicals, non-electrical machinery, surgical instruments, sporting goods, and leather products, and other goods. According to the Census of Manufacturing Industries 2005-06, the total number of Industrial Units in Pakistan was 6,417. No other census has been conducted since. Details of industry have been included in relevant chapters by province and district.

Pakistan has deposits of several minerals including coal, copper, gold, chromite, mineral salt, and bauxite. A variety of precious and semi-precious minerals like peridot, aquamarine, topaz, ruby, emerald, as well as rare-earth minerals like bastnaesite and xenotime, sphene, tourmaline, and many varieties and types of quartz are also being mined[19] in Pakistan. Currently, around 52 minerals are mined and processed in Pakistan[20].

The most mined minerals of Pakistan are[21]:

The following table[22] shows major minerals of Pakistan and the regions where they are found:

Utilizing centuries-old techniques and traditions, the handicrafts of Pakistan are marked by their intricate embroidery, complicated production processes, and their use of natural materials like dyes, wood, clay, cotton, silk, and other various plant-based products as well as naturally occurring brass, silver, and marble.

The handicrafts/ cottage industries of Pakistan hold an important place in most rural areas, and are now gaining importance in the urban areas as well. There is a great demand for hand-woven carpets (all sizes), embroidered work on different textiles, brassware, rugs and traditional bangles as well as other traditional handicrafts. These are also considered important export items and are in high demand in international markets. Encouraging the handicraft/ cottage industry has a significant economic impact, especially for women in Pakistan, as the production and sale of traditional handicrafts can help women earn a modest income without leaving the domestic space. Cottage or small scale industries like carpet-weaving, candle-making and embroidery can be established in houses and women can be gainfully employed. This increases the active labor force, and contributes to the overall economic well-being of the country.

Some of the traditional handicrafts of Pakistan include

The type of handicrafts associated with, and produced in, particular provinces is interwoven with the region’s culture, and thus, the regional handicrafts are considered to be indigenous to the areas of production. Each province produces handicrafts that are unique to the province in design, and technique. Some examples include:

[1] A barrage is constructed such that it can store water on one side as needed and serve as a storage reservoir. Electricity can also be produced.

[2] Headworks is a regulator to control the flow of water and distribute it through canals for irrigation.

[3] The Spate Irrigation or Rod Kohi System of Irrigation is a type of water management unique to arid regions bordering highlands. It is common in South Asia, the Middle East, North Africa, and the Horn of Africa.

[5] This table was compiled using the values published on the FAOStat 2016 website (see: http://www.fao.org/faostat/en/#rankings/countries_by_commodity). The website allows users to search by country and commodity, so each commodity’s name was chosen from the dropdown menu, and then recorded in the table. Pakistani commodities not ranked by FAOStat have not been included in this table.

[8] All figures in numbers/ heads

[14] Exclusive Economic Zone is a sea zone prescribed by the United Nations Convention on the Law of the Sea over which a State has special rights regarding the exploration of, and use of, marine resources, including energy production from water and wind.

[18] A Study on Assessment of Fisheries Resources in Pakistan and its potential to Support Marine Economy by Khadim Hussain, Sally Kartika, Mohammad Mohsin, Kiran Nazir, and Mu Yongtong

[21] Economic Mineral Deposits of Pakistan (Board Of Investment Pakistan)

[22] Pakistan Board of Investment, Government of Pakistan, mining over view