Nushki district lies between 65° 07′ 42″ to 66° 18′ 45″ east longitudes, and 29° 01′ 51″ to 29° 52′ 37″ north latitudes. The district is located in the north of Balochistan, sharing its boundaries in the east with Quetta and Mastung, in the west with Chagai district, in the south with Kharan and Kalat districts, and in the north with Afghanistan.

According to popular legends, the name Nosh-Kah was given to this region by the Khan of Kalat, Mir Noori Naseer Khan I (1749-1794) while he was crossing this area with Ahmad Shah Abdali on his way to fight against the Marathas at Panipat (the Third Battle of Panipat, 1761). The name became Noshkay and was then changed to Nushki by the British.

Nuski District at a Glance

Table 1.1 Nushki District at a Glance

[11] 1998 Census; Separate data for Nushki is not available; Data for Chagai district is being reproduced

Nushki is located 490 km east of Lake Hamun in the Seistan Region of Persia (Iran) near the Afghan-Iran border on the Bolan Pass route, due to which location it has always been the historic gateway between Afghanistan, Iran, and Balochistan.

The Baloch and Brahvi/ Brahui tribes are most likely the oldest inhabitants of the district; the Baloch, according to their popular history, migrated from Aleppo (Syria), and the Brahvis have always lived in Kalat district. The Brahvis gradually moved north to settle in small pockets with a major concentration in the Nushki area.

According to the Nushki District Development Plan 2011, by Government of Balochistan (GoB) in collaboration with UNICEF:

Both the tribes appear to have been firmly established in the beginning of the 16th century in the area, as is seen from a narrative of the flight of the Mughal Emperor Humayun along the valley of the Helmand to Seistan in 1543. In the second half of the 16th century, the District remained under the rule of Safavid Dynasty. Later in history, it appears as part of the Mughal Empire. With the downfall of the Mughal power, the northern portion of Nushki was annexed to the territories of Khan of Kalat, Mir Abdullah Khan (1716 – 1730). In 1733 Sher Khan the Baloch, Chief of Nushki, submitted to Mir Hassan, the second son of Mir Wais and the founder of the Ghilzai Dynasty. Mir Hassan ruled the adjacent Pathan area now forming Quetta and Pishin Districts, and compelled the Baloch tribes to pledge their allegiance.

A few years later, Nadir Shah (Shah of Iran 1688-1747) sent an expedition against Nushki under Muhammad Ali Beg, who inflicted a severe defeat on the Baloch near Shorawak. In 1740, Nadir Shah conferred Nushki as a fief upon the chief of Kharan. Later, it was retaken by Mir Nasir Khan, the great Brahvi ruler of Kalat (1750-1793). Nushki then, became a Niabat of the then Kalat State and remained so for about a century.

The advent of the British in this area commenced with the British agreement of 1878 with the Khan of Kalat. Subsequently, as a result of the partial survey and definitions of the western boundary with Iran from Kuhak to Koh-i-Malik Siah and demarcation of the Afghan Baloch boundary in 1896, the western Sanjrani (present Dalbandin sub-division and Nokundi Tehsil) became part of Kalat State. In November, 1896, the first British political agent of Chaghai was appointed. Nushki continued to be Niabat of Kalat State. Three years later, however, the Niabat of Nushki was leased by the British from the Khan on an annual rent of Rs. 9,000/-. The management of the Niabat was handed over on 1st July, 1899 to the British Government, with the full rights and privileges, as well as full and exclusive revenue, civil and criminal jurisdiction, including all rights to levy dues and tolls. From July, 1899 to 13 August, 1947 the district remained under the British Government.

After Independence in 1947 and after the declaration of Balochistan as a province in 1970, Chagai became a district within Quetta Division. As stated already, Nushki remained a Tehsil of Chagai district till April 2004, when it was upgraded to a district level.

At the Federal level, Nushki district is allocated a set number of representatives in both the National Assembly and the Provincial Assembly:

Under the Local Government Act 2010, Amended in 2011, Nushki district has 1 District Council with 8 Union Councils. It has 1 Municipal Committee as follows:

Each Union Council is represented by 1 member in the District Council. In addition, there is special representation of women (33%) and of workers and peasants (5% each).

Nushki district[2] has a total area of 5,797 km2 and has 1 tehsil, named after its headquarters with Union Councils as follows:

[1] This seat is shared by Quetta, Chagai districts

The following sites are also of historical significance: 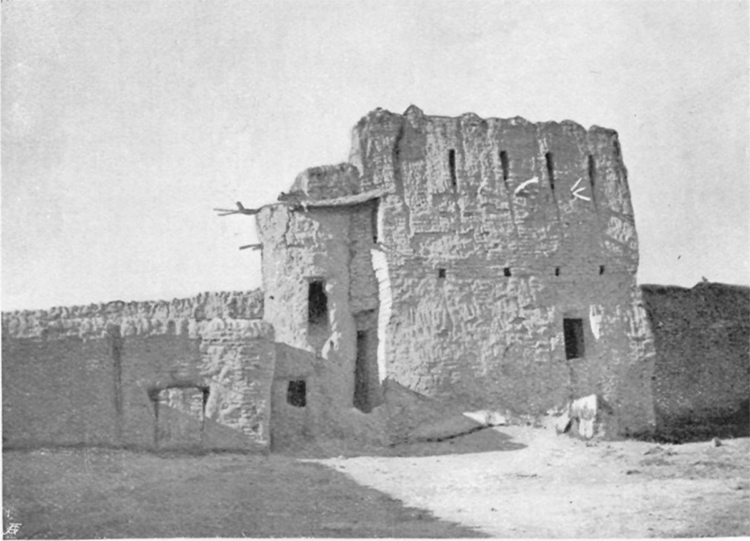 Other shrines of significance in the district include:

The district is situated on a plain at the base of Quetta Plateau, 884 m (2,900 feet) above mean sea level.

The eastern portion of the district is hilly, whereas the remainder consists of a level plain with sand hills on the north and the center. The terrain elevation varies between 807 m to 2,064 m above mean sea level. From Nushki, the flat Balochistan desert stretches to the north and also westwards toward the Helmand River.

The northwest, southwest and a part of the southeast of the district, including the villages of Buttoe, Zangi Nawar, Zarog, Esa Chah, Darzi Chah, and Kani, consist of sand dunes and interdunal (between dunes) plains.

The plain known as Dak is an alluvial plain and is naturally fertile.

There is no river with perennial water flowing through the district, but there are innumerable channels and hill torrents which originate from the mountains and flow during rains. Very little water, however, reaches the lake basins (hamuns). The most important of these lakes is the Kaisar Rud. Streams include the Kishingi, Bhalla Dose, and Gori.

Nawars (earthen ponds constructed for collection of rain water for use by both humans and animals) are widespread in the district.

Zangi Nawar was an important lake in the district which was listed as a Ramsar Site, but due to a long drought in the region, it dried up, and was de-listed from the Ramsar List. Khanuwaal is another important lake (nawar) of the district.

The banks of the ponds are mostly planted with Tamarix articulate trees.

The type of forests and the area they occupy are included in the data recounted in the chapter on Chagai district.

According to the Nushki District Development Profile 2011, by P&D Department GoB in collaboration with UNICEF as well as the GoB Official Website (retrieved on September 04, 2014), Notified Forest Areas are as follows:

In addition to the above Notified Forest Areas, the Wildlife Protected Area in the district is as follows:

According to Balochistan Development Statistics 2018-19 there is no designated forest area in the District. 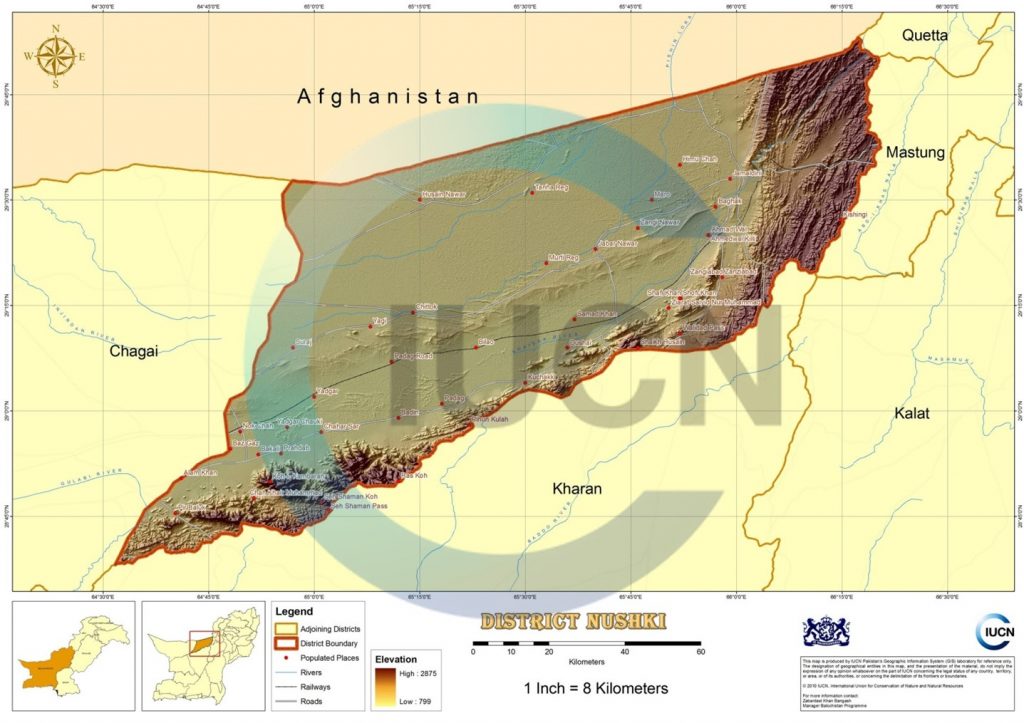 The plain areas of the district mostly consist of alluvial soil interspersed with tracts of sand and intersected by a low range of stony hills.

The climate of Nushki district is extremely hot in summer and mild to severely cold in winters. The difference between day and night temperatures is considerable, and the climatic conditions vary from area to area. Since the district falls outside the sphere of Monsoon currents, rainfall is irregular and scanty. Separate data for Nushki could not be collected for rainfall and temperature, and hence, the data for Chagai district is taken to be relevant for Nushki (please refer to the chapter on Chagai for details).

During summer months, a wind called Goreech (northern wind) blows at night, which makes the nights cool. This wind is often replaced by Her Goath (the southern wind) which is very hot and carries dust with it, bringing dust storms in its wake.

The following table shows the population of Nushki district as per 2017 Census:

Since separate data for Nushki is not available, the data for Chagai district is being recounted[1]:

About 20.3% of the population depends upon agriculture for their sustenance. The district falls under the Tropical Agricultural Zone of Pakistan and Zone II of Balochistan. The major crops are wheat, barley, cumin, jowar, bajra, maash, masoor, moong, cotton, rapeseed, mustard, canola, maize, sunflower, and fodder. 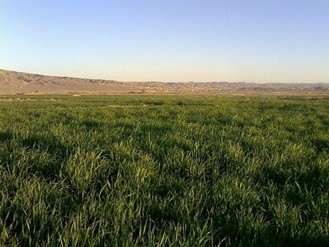 Livestock breeding is the second most important sector of the economy. It is the main source of income for nomadic families. The following table shows the position of the livestock population according to the 2006 Census of Livestock (qtd. in Balochistan Development Statistics 2018-19) in Chagai district, in the absence of separate data for Nushki:

The indigenous livestock breeds of the region are the same as those of Chagai district. 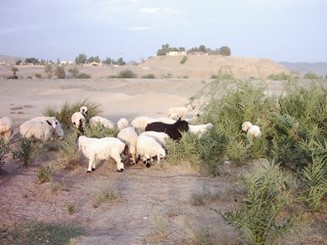 There are 3 government-owned[1] poultry farms in Chagai district (separate data for Nushki district is not available).

Bee keeping is not an economic activity in the district.

There are no fisheries in the district. Fishing is carried out in Zangi Nawar Lake and the Khanuwaal Lake.

The following table shows the mode of irrigation and area being irrigated by the mode (Balochistan Development Statistics 2018-19):

In order to improve the existing irrigation system, the Government of Balochistan is building small dams all over Balochistan. The dam being built in Nushki district is Kaluwaal Delay Action Dam.

There is no industry in the district.

Chromite and graphite are being mined in Nushki district[1] and oil and gas exploration is being carried out as well.

The handicraft cottage industries include products made with the leaves and other parts of the mazri plant. Baskets, mats, and other household goods are made from leaves of this plant. Carpets made with sheep’s wool and other woven articles manufactured by women and girls are common, as are handicrafts like embroidered shirts and caps.

Nushki is a fairly large (area-wise) district[1] of Balochistan, with a population density of just 24 persons per km2. Road density is, however, very low: black topped road density is just 0.04 while shingle road density is 0.08. The RCD highway passes through Nushki, as does the railway line. 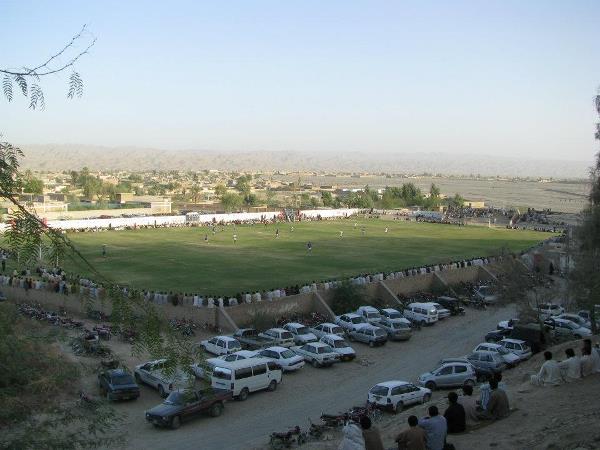 The road statistics of Nushki district are included in the Chagai district data which is reproduced here (Balochistan Development Statistics 2018-19): 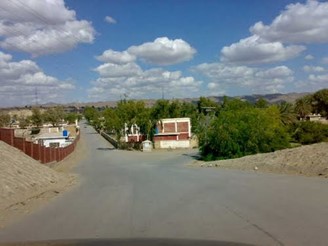 Pakistan Railways owns a railway line passing through the district. There are small railway stations in the district with Nushki Railway Station being the largest. There is a small airport in the district called the Nushki Airport. 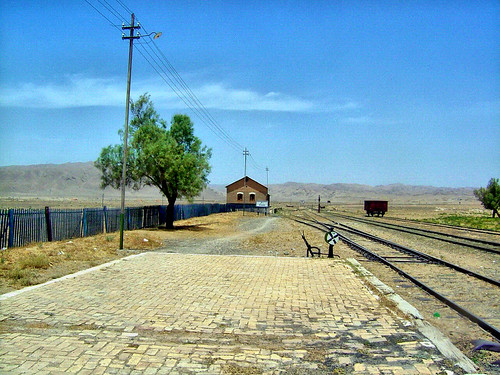 Like Chagai district, Nushki has no radio or TV stations, but TV can be viewed via cable and radio channels can also be accessed.

The Quetta Electric Supply Company (QESCO) looks after the supply of electricity. 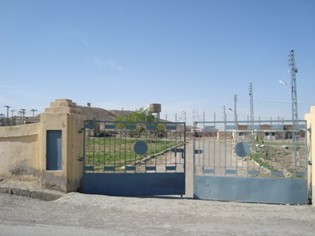 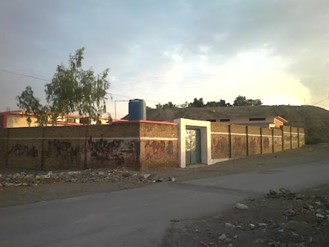 For the purposes of administration, the district is divided into two areas: “A” and “B”. The urban areas of Nushki come under “A” area and the rest of the area of the district falls in “B” area. “A” area is controlled by a regular police force headed by the Deputy Superintendent of Police (DSP). This DSP is assisted by Station House Officer (SHO), Inspector Police, and other staff. “B” area is controlled by levies force. Levies are a conventional force to maintain law and order. In levies, men of different tribes are employed. The levies force comes under the direct control of the Deputy Commissioner (DC). Generally, the levies force is well-equipped to deal with the law and order situation in the district.

Following are the vegetation zones[1] and type of vegetation in the district: 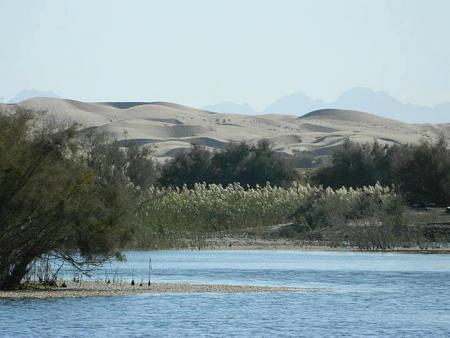