Nawabshah district (now called Shaheed Benazirabad) was named after Syed Nawab Shah, son of Syed Nawaz Ali Shah, who migrated from Sann (District Dadu) to the region with his family in 1881. The district is located between 25° 59Ꞌ to 26° 38’ 5” North latitudes and 67° 52Ꞌ to 68° 27Ꞌ 2” East longitudes. It is bounded on the North by Naushero Feroze and Khairpur districts, on the South by Hyderabad district, on the East by Sanghar and Khairpur districts, and on the West by River Indus, beyond which are Larkana and Dadu districts. The district is situated nearly in the center of Sindh and is, thus, known as the Heart of Sindh. It was renamed Shaheed Benazirabad district[1] in April 2008. The district continues to be referred to with both names in common parlance.

[14] According to Land Utilization Statistics 26,000 HA have been marked as forests in the district

Brief History of the District

The history of the area called Nawabshah district (now S. Benazirabad district) is not distinguished from the history of Sindh, since no separate records are available. This part of Sindh has been ruled by Jains[1], Buddhists, Greeks, and Arabs. Sindh came under Muslim rule after the area was conquered in 711 AD, by Arab General Muhammad Bin Qasim who defeated Raja Dahir at Brahmanabad in Shahdadpur, which formed part of Nawabshah district till 1953, when it was separated and made part of Sanghar district. The Sammas (1351-1524 AD), Arghuns (1520-1554 AD), Tarkhans (1554-1591 AD), and the Kalhoras (under Noor Muhammad Kalhora) controlled the region after the Arab conquest. The Kalhoras ruled for 82 years, from 1701 to 1783, after which the Talpurs rose to power in the region, having defeated the Kalhoras at Halani in 1782. Halani was in Kandiaro which was formerly a Taluka of Nawabshah district but is now in Naushero Feroze district. At the time of the Kalhora defeat by the Talpurs, Abdul Nabi Kalhora was the chief of the Kalhoras.

After the 1843 invasion of Sindh by General Charles Napier, who was also made the first Governor General of Sindh, the region was divided into various administrative divisions which were assigned to Zamindars (or landlords) to collect taxes for the British. During the last decade of the 19th century, and the early half the 20th century, the rulers developed these areas as urban centers. People migrated from other districts and provinces as well, and started to reside in the region. The British Empire named these small developed areas talukas, administrative classifications relevant to-date.

Taluka Nawabshah was established in 1907, named after Syed Nawab Shah, son of Syed Nawaz Ali Shah, who migrated from Sann, (district Dadu) to Nawabshah with his family in 1881. The rulers of that period developed the area into an urban area and the town thus developed was called Nawabshah. Families from other districts and provinces also settled here and thus the area developed until it became big enough to be upgraded to Nawabshah district in 1912. Mr. Hamid Ali Khan was the first Deputy Commissioner of Nawabshah district, taking office on November 1, 1912. The first Superintendent of Police of the district was P.M. Stewart, while the first Muslim Superintendent of Police Nawabshah District was Moulvi Zia-ud-Deen who took office on July 26, 1918. At the establishment of the district in 1912, there were 7 talukas: Kandiaro, Naushero Feroze, Moro, Sakrand, Nawabshah, Sinjhoro, and Shahdadpur. Naushero Feroze is now a separate district and Kandiaro and Moro Talukas now form part of Naushero Feroze district. Sakrand is still part of Nawabshah district, whereas Sinjhoro is part of Sanghar district and Shahdadkot is itself a separate district.

Nawabshah district was renamed Shaheed Benazirabad District in April 2008, when a resolution was passed by Provincial Assembly, Sindh unanimously.

Nawabshah city was a sizeable town during the Indus Valley Civilization as is evident from recent discoveries at Chanhu Daro in S. Benazirabad district.

At the Federal level, S. Benazirabad district is allocated a set number of representatives in both the National Assembly and the Provincial Assembly:

The district has 1 municipal committee: Nawabshah, and 8 Town Committees as follows:

There are 4 tehsils/ talukas in the district as follows:

The following Sites are being protected under Pakistan Laws:

Other tourist attractions include: 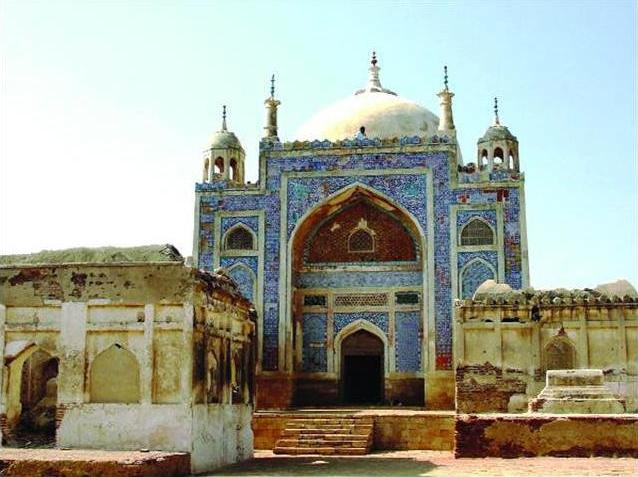 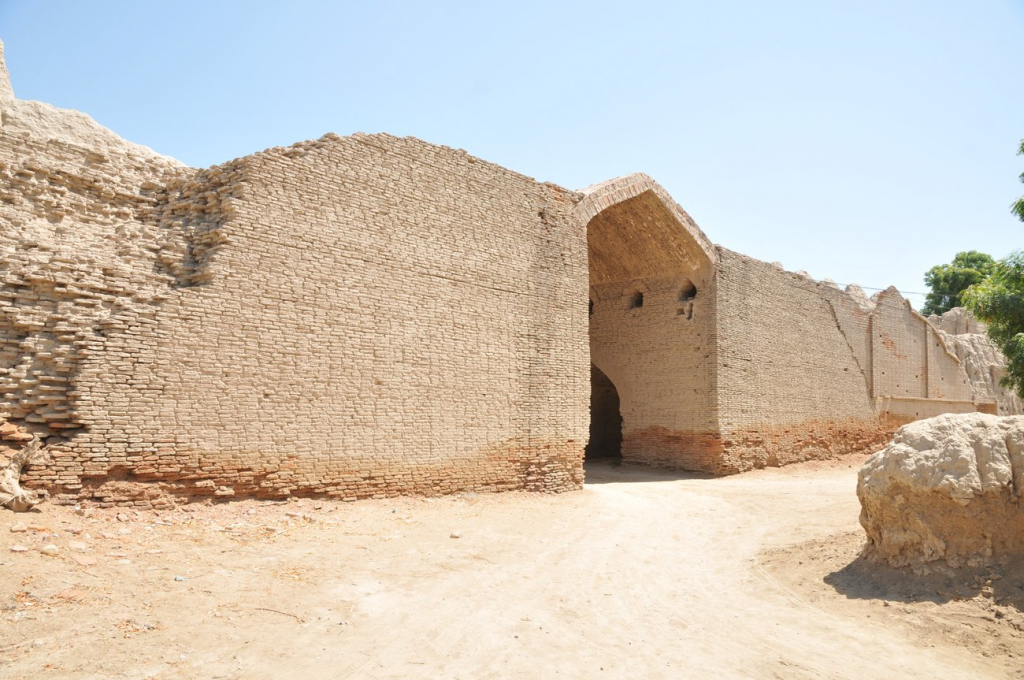 [1] Traditionally known as Jain Dharma, Jainism is an ancient Indian religion which preaches non-violence and respect for all living beings. Architectural remains of the practice of Jainism in Sindh can still be seen scattered in the districts of Tharparkar, Karachi, and Hyderabad.

Geographically, most of the district is located in what is termed as vicholo or Middle Sindh, with Nawabshah town being almost the exact center of Sindh. With the exception of the northeastern part of Nawabshah Taluka which is a desert known as Gunjo Thar, the rest of the district is a fertile plain formed by the Indus River. The average elevation of the area is about 50 meters above sea level.

Total area marked for forests in S. Benazirabad district is 26,000 HA[2]. There are Riverine forests and irrigated plantations in the district. The main vegetation of these forests is babul (Acacia nilotica), kandi/jand or khejri (Prosopis spicigera), bahan or poplar (Populus euphratica) and 2 species of tamarisk: lai or French tamarisk (Tamarisk gallica) and jhao or salt cedar (Tamarisk dioica).

Some of the important reserved/ protected forests of the district include:

The soil is sandy, with hard clay loams. The district benefited more than any other part of Sindh from the development of irrigation from Rohri Canal.

For the purposes of climate records, S. Benazirabad district is divided into 2 zones: North and South. The northern part is affected by the desert and hence climatic conditions are extreme. The southern part enjoys the advantages of sea breeze from the Indian Ocean. The summer season commences from April and continues till October. May, June, and July are the hottest months in the district, with temperatures going up to 50 °C. The mean maximum and minimum temperatures during June (the hottest month) are 44 °C and 28 °C respectively. The months of August and September are humid and stifling. December, January, and February are the coldest months. Mean maximum and minimum temperatures during January (the coldest month) are 24 °C and 6 °C respectively. Frost is rare but does occur.

Rainfall is scanty, erratic, and mostly occurs during the monsoon season—June to September; mean annual rainfall is 200 mm.

The district is located in Zone 2 A of the Seismic Activity Zone Map of Pakistan which means there will be low to moderate damage to property due to earthquakes.

[2] According to Land Utilization Statistics for the year 2017-18

The following table shows the tehsil-wise population of Nawabshah district as per the 2017 Census:

[2] Constituted out of Nawabshah Taluka in 2005

The major economic activities of the district are[1]:

Livestock plays an important role in the economy of the country. It provides job opportunities to a majority of the rural population. The following table shows the livestock statistics of the district according to Sindh Development Statistics 2017-18:

The indigenous livestock of the district include kooka sheep, kamori, and barbary goats, and cross breed cattle.

The following table shows the main land use statistics of the district according to Sindh Development Statistics 2017-18:

The district is irrigated through the Sukkur Barrage Irrigation System. There are 2 Irrigation Water Supply Divisions called Nasrat Division and Dad Division in the district. The canals of both these divisions off-take from Rohri Canal which, in turn, off-takes from Sukkur Barrage.

During British rule (1843-1932), there were 21 feeder canals, both big and small[3] tapping Indus at various times, which are still being used for irrigation purposes. The notable ones are Naulakhi, which is 40 km in length, and 12 m wide at its head[4], Nasrat (48 km long and 10 m wide) and Dad Wah (85 km long). There are now 74 channels, both big and small, about 645 km in length in the district. Naulakhi is one of the oldest canals and is believed to have been excavated during the Samma period. Nasrat canal was excavated by Nasrat Khan Chandio during the rule of Mian Noor Mohammad Kalhoro. Murad Branch (40 km long), Bagh Wah (44 km long) and Piroz Wah (29 km long) are 3 important branches off Naulakhi, excavated during Kalhora rule.

The poultry industry is the second biggest industry of Pakistan, contributing significantly to the national economy while also providing jobs to a large segment of the population. There are 278 poultry farms[2] in the district.

Fishing is carried out in the Deh Akro II Wetland Complex and the River Indus. Most of this fish is consumed locally.

The following table shows the type and number of industries[3] working in the district:

Most of Sindh’s interior areas, including S. Benazirabad district, produce rich and colorful traditional handicrafts and artwork in different mediums, like cloth, wood, clay, and glass. The main expertise of the region lies in the production of rallies, Sindhi caps, decoration pieces, embroidery work, gota kanari work, crochet work, and needle work. Khaddi cloth on hand looms is also produced in the region.

Important modes of transport and communication in the S. Benazirabad district are roads and railways. The district is also linked to other parts of the country by air. There is a network of black topped roads in the district connecting all Taluka Headquarters and Towns. In addition, kacha (non-metaled) roads also exist in the district. Union councils have constructed a large number of links from farms to market roads, which have also facilitated trade and communication.

As per the Road List issued by the Sindh Government, the following table shows the road lengths in the district:

According to Sindh Development Statistics 2017-18, total roads in the district were 1,714 km.

Some important roads of the district include:

There is an International airport in Nawabshah, called Nawabshah Airport, which features the longest runway in Pakistan. In addition, there is a PAF air base in Nawabshah.

There is no radio station in the district, nor is there a TV station, but both TV and radio can be accessed.

Most of Pakistan’s major banks have their branches[2] in the district, including:

HESCO (Hyderabad Electric Supply Corporation) is responsible for providing electricity to S. Benazirabad. There are 6 grid stations in the district, out of which 5 grid stations have a capacity of 132 KV and one has 66 KV capacity.

The literacy rate of the district as per Pakistan Social & Living Measurement Survey 2013-14 (PSLM) is 46% with 61% urban and 39% of the rural population being literate. The district is home to the only all-female medical college in Sindh: the Peoples’ Medical College.

The following table shows details of all government educational institutions of the district as per Sindh Development Statistics 2017-18:

There are private educational schools (Primary to Secondary level) in the district as well. 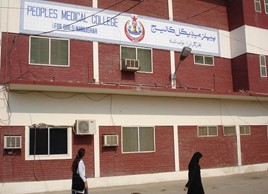 There are a total of 28 police stations[9] in the district. Each Police station is headed by Deputy Police Officer/ Senior Superintendent Police. 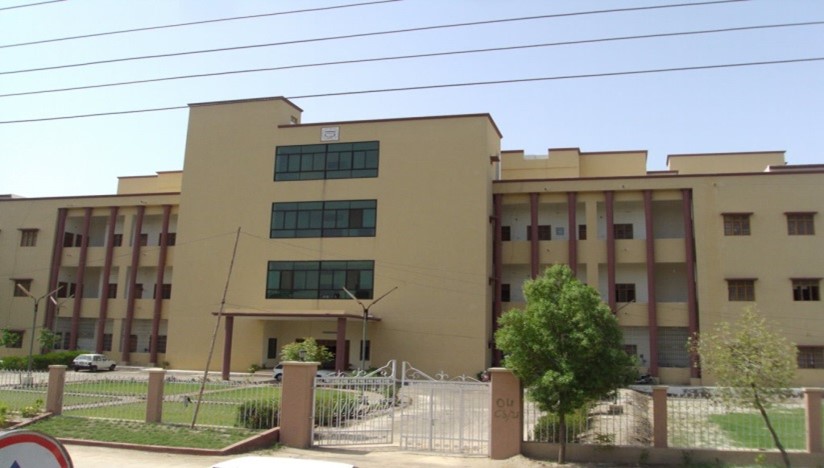 [2] List of Reporting Bank Branches by State Bank of Pakistan, 2019.

[2] Table 17, Number of Commercial Poultry Farms and Number of Birds by Size of Flock

Some parts of S. Benazirabad fall under the Nara desert Eco-Region of Pakistan. These areas are characterized by large tracts of barren land that receive very little rainfall leading to frequent drought-like conditions. The vegetation primarily comprises of stunted scrubs. The other parts are fertile and irrigated by the Indus Basin Irrigation System. Since the district is devoid of large-scale industry and also lacks a large industrial base, it is fairly free of air pollution; some pollution is caused by vehicular emissions and dust particles.

The most common trees found in the district are babul (Acacia nilotica), kandi or jand/khejri (Prosopis spicigera), bahan or poplar (Populus euphratica) and 2 species of tamarisk i.e lai or French tamarisk (Tamarisk gallica) and jhao or salt cedar (Tamarisk dioica). The riverine forests along the banks of the Indus support a variety of flora including acacia, tamarisk, and prosopis.

Reptiles include the marsh crocodile, ghariyal, snakes, and various types of lizards.

The following areas of the district have been declared as protected under Pakistan Government Laws: