Topographically, Sindh can be divided into 4 distinct parts with the dry and barren Kirthar Range in the West, a Central Alluvial Plain bisected by the River Indus, a desert belt in the East and the Indus delta in the South.

The Western hilly tract consists of the hill ranges of Kirthar, Pab, Lakki (off-shoot of Kirthar Range), and Kohistan. There is no vegetation on these ranges due to scanty rainfall. The Kirthar Mountain Range extends southward for about 300 km (190 miles) from the Mula River in East-central Balochistan to Cape Monze (Muari), near Mubarak Village, Karachi, on the Arabian Sea. This Range forms the boundary between the Lower Indus Plain (in the East) and Southern Balochistan (in the West). It consists of a series of parallel rock hill ridges rising from 1,200 m (4,000 feet) in the South to nearly 2,500 m (8,000 feet) in the North. The hills decrease in height from North to South where they spread out in width and are known as Sindh-Kohistan.

The maximum elevation of Borough Hills, a peak in the Sindh segment of Kirthar Mountains, was reported in April 2009 as 2,151 m (7,056 feet) above sea level, which would make it the highest peak of Sindh, situated a few miles Northwest of the Gorakh Hill Station, which is located at a height of 1,734 m (5,688 feet).

The next highest peak of Sindh (again in the Kirthar Range) is a 2,097 m (6,880 feet) high peak, known locally as Kutte-ji-Kabar (Dog’s Grave). There are also a number of other peaks in the Sindh segment of Kirthar Mountains, heights of which exceed 1,676 m (5,500 feet); these peaks receive occasional snowfall during the winter.

The Lakki Mountain Range is located in the North of Manchar Lake (Jamshoro district) and is mainly composed of tertiary rocks; it contains a large number of thermal springs. This range is 80 km (50 miles) long and is an off-shoot of the Kirthar Mountain Range.

The Pab Range (another off-shoot of Kirthar Range) is mostly located in Balochistan Province in the Eastern corner of Jhalawan Country (Khuzdar) to Lasbela but a portion extends into Sindh’s sea coast near Karachi.

The Central Plains are fertile alluvial plains constituting the valley of the Indus River. Collectively, the Central Plains are about 580 km long and about 51,500 km2 in area. They gradually slope downwards from North to South. The plain area is a vast region, rising to a maximum of 100 m above sea level. The lower part of this area, which starts near Hyderabad, is predominantly covered with flood silt. There are a few limestone ridges in this area. One of these ridges is near Rohri (Sukkur), commonly known as the Rohri Cuesta. It extends about 50 km South of Rohri and reaches an average height of about 75 m above sea level. Another such ridge is the Ganjo Takkar, a cuesta of limestone which stretches southward from Hyderabad covering a distance of 25 km. There are also a few depressions and lakes in the Central Plains.

The region is divided into 3 distinct zones:

The Eastern Desert region includes low dunes and flats in the North, the Achhrro Thar (white sand desert) to the South, and Thar Desert in the Southeast. A major portion of the Thar Desert lies in India in the East. In the North, the Thar Desert extends up to Bahawalpur in Punjab, where the Punjabi portion is called Cholistan. With little rain and a low water table, the area is a barren land with scattered, stunted, thorny bushes. The landscape of the desert is sandy and rough with sand dunes covering more than 56% of the area. The relief features in the area vary between flats near sea level to sand dunes reaching more than 150 m above sea level. This relief is due to a small hilly tract called Nagarparkar Taluka of Tharparkar District. In the extreme Southeast corner of this desert lies a small hilly tract known as Karunjhar Hills, consisting of granite rocks. These hills are about 20 km in length from North to South and reach a height of 300 m. The hills are a part of the Aravali Range. This range is a part of the Archaen system which has some of the oldest known rocks of the earth’s crust.

The deltaic plains of Sindh lie in the Lower Indus valley and are comprised of alluvium, trenched with river channels in some places and overridden by raised terraces in others. A few isolated low limestone hills are the only relieving features in the plains which are otherwise at one level. The distributaries of River Indus start spreading out near Thatta across the deltaic flood plain[1] in the sea. The even surface is marked by a network of flowing and abandoned[2] channels. A coastal strip 10 to 40 km wide is flooded at high tide and contains Mangrove swamps.

The chief characteristics of the region are the creeks, which serve as the changing outlets of the Indus and as inlets for the sea. The lowland Indus Plain merges into this region.

Sindh is entirely dependent upon River Indus for its survival and development. About 95% of all farmlands in Sindh obtain water for irrigation from River Indus. There are a large number of both seasonal and perennial streams in the province. Khadeji in Karachi and Achleshwar, Sardharo in Tharparkar, as well as Gaj and Hab in District Dadu are a few of the perennial streams flowing in the province.

Some of the main rivers and streams include:

In addition, there are a large number of seasonal rivers and streams that carry run off from the mountains down into the Sindh plains. Malir, Naing Nai, Bhetiani, Gordhoro, Budhni Nullah, and Gujjar Nullah are a few of them. The main hill torrents that enter in the kutcha[4] area are Gaj Nai, Angai Nai, Taki Nai, Nali Nai, Shori Nai, and Gar Nai. All these water courses ultimately reach the Manchar Lake.

There are a total of 42 streams in Sindh, of which, 39 are in Dadu district, 1 in Thatta district, and 2 in Karachi. Of the 39 streams in Dadu, 13 are thermal springs. 2 additional streams, one in Karachi and one in Thatta, are also thermal.

There are a large number of lakes and wetlands of international and national importance in Sindh. Some of these are protected under International Wildlife laws.

The following table provides a list of all lakes and wetlands of Sindh:

Total forest cover in the province is 1,034,000[6] HA. There are 4 different types of forests in Sindh as follows:

Riverine forests are the mainstay of forestry in Sindh. Besides providing a source of livelihood for thousands of people, these forests provide fuel wood, timber, fodder, honey, and tannin. Moreover, they serve as carbon sinks and also protect the surrounding areas from the severity of floods. 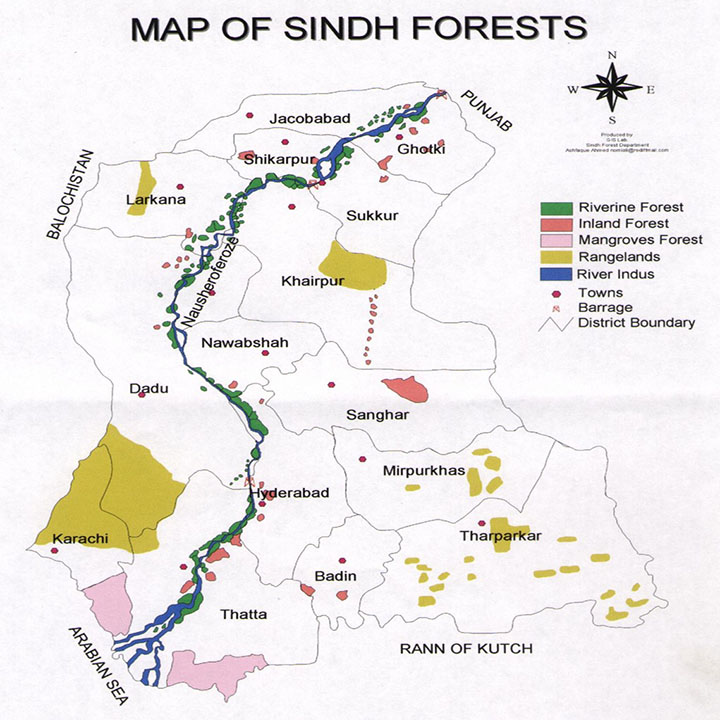 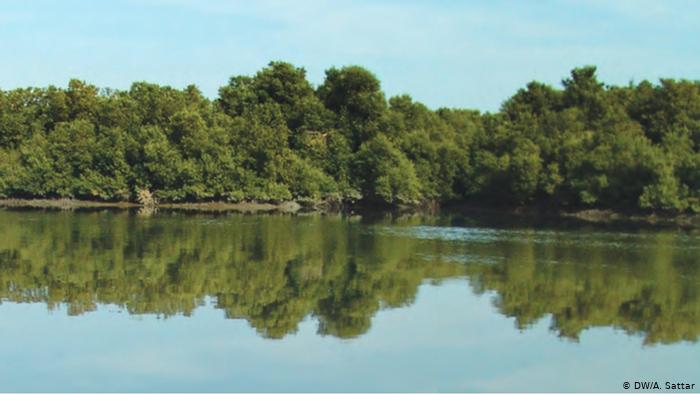 The soil in the plains of Sindh is mostly plastic clay that has been deposited by the Indus. When combined with water, it develops into a rich mouldable clay, and without water it degenerates into a dry, sandy, desert-like consistency. Nearly the entire Indus valley is rich in soil which is extremely friable[8] and easily disintegrated by flowing water. As a result, the water in Sindh always contains a large amount of suspended silts. The following map shows the location of different types of soils in Sindh: 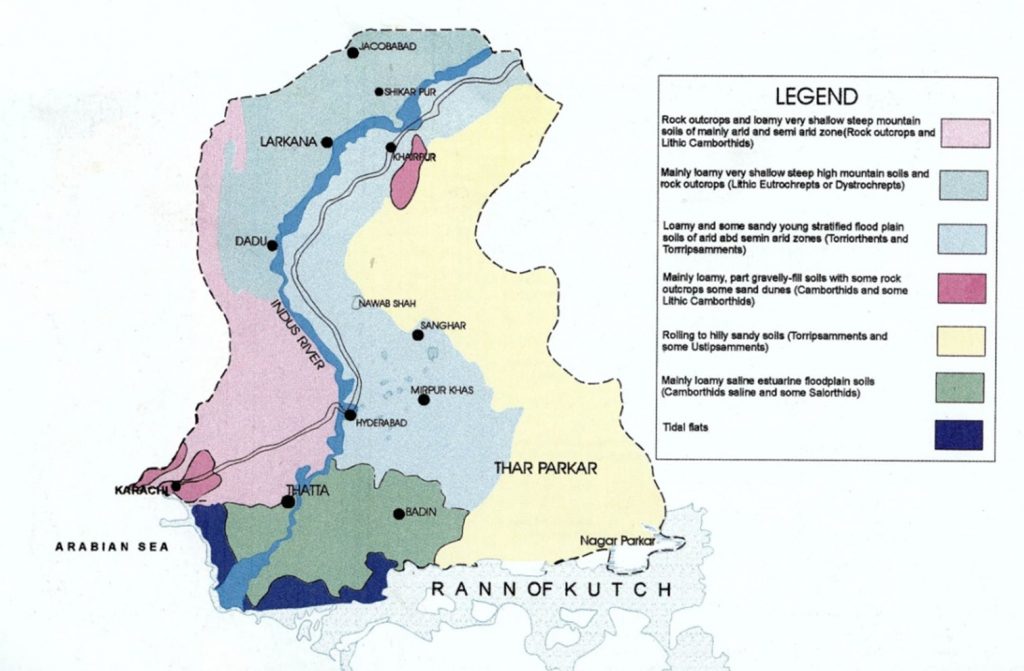 The climate of Sindh is reminiscent of both the Sahara type and of that prevailing in the tropical regions of low and dry lowlands. The Tropic of Cancer passes a little below its Southern boundary, and the thermal equator passes through the province, making solar heat more intense, with longer hours of sunshine. The physical features of Sindh—the Thar Desert in the East, sea in the South, and the Kirthar Range in the West and Northwest—make the climatic conditions variable.

The highest humidity occurs in August (75%) while December (47%) is the driest month in Lower Sindh. April is the most humid (47%) month of Upper Sindh. Thus, the weather is drier and hotter in Upper Sindh, but is more bearable due to low humidity. The winds in Upper Sindh are usually calm for nearly half the year, but nearer the coast, the wind velocity is high, especially during the Monsoon months. Both dust storms and squally weather are common at the beginning of the 2 chief seasons (summer and winter).

Climatically, Sindh is divided into 3 sections:

In Siro, or Upper Sindh, dry atmospheric conditions prevail. Rainfall in Sindh is the lowest of Pakistan and the temperatures are the highest. There is a great range of variation between day and night temperatures and frost is common in winter.

In Wicholo, Middle Sindh, Southwest Monsoon winds blow throughout the year, making the heat bearable, especially at night. In some years, the rains are slightly higher than those recorded in Karachi. The temperatures are lower in this region than in Upper Sindh and humidity is moderate. Dry hot days and cool nights in summer are a characteristic of this region.

In Lar or Lower Sindh, the winding coastline affects the climate of the region to some extent. The coastline and deltaic regions are naturally damper, with smaller ranges of variation between day and night temperatures. Rainfall is at times lower than in Middle Sindh. Dampness causes muggy weather in summer and the climate is characterized as Maritime Climate.

Sindh falls in-between the two Monsoons: the Southwest Monsoon from the Indian Ocean and the Northeast or retreating Monsoon, deflected towards the province by the Himalayan Mountains. It generally escapes the climactic influence of both. The average rainfall in Sindh is 150 to 180 mm per year. This scanty rainfall during the two Monsoons is compensated by the Indus, in the form of inundation, which is caused twice a year by the spring and summer melting of Himalayan snow as well as by the brief rainfall in the Monsoon season.

As a subtropical region, Sindh is hot in the summer and cold in winter. Temperatures frequently rise above 46 °C between May and August, and the minimum average temperature of 2 °C (36 °F) occurs during December and January. The annual rainfall averages about 179 mm occurring mainly during July and August. The Southwest Monsoon wind begins to blow in mid-February and continues until the end of September, while the cool Northerly wind blows during the winter months, from October to January.

The record highest temperatures of the summer months are usually recorded in Shaheed Benazirabad district (previously called Nawabshah district) and Sibi in Sindh. Starting in May and going up to August each year, temperatures in these districts can rise to above 48 °C. The climate in the region is dry and hot, but during the winter months, temperatures can sometimes fall to 0 °C or even lower than -7 °C in December or January.

The following map shows the seismic zones of Pakistan: 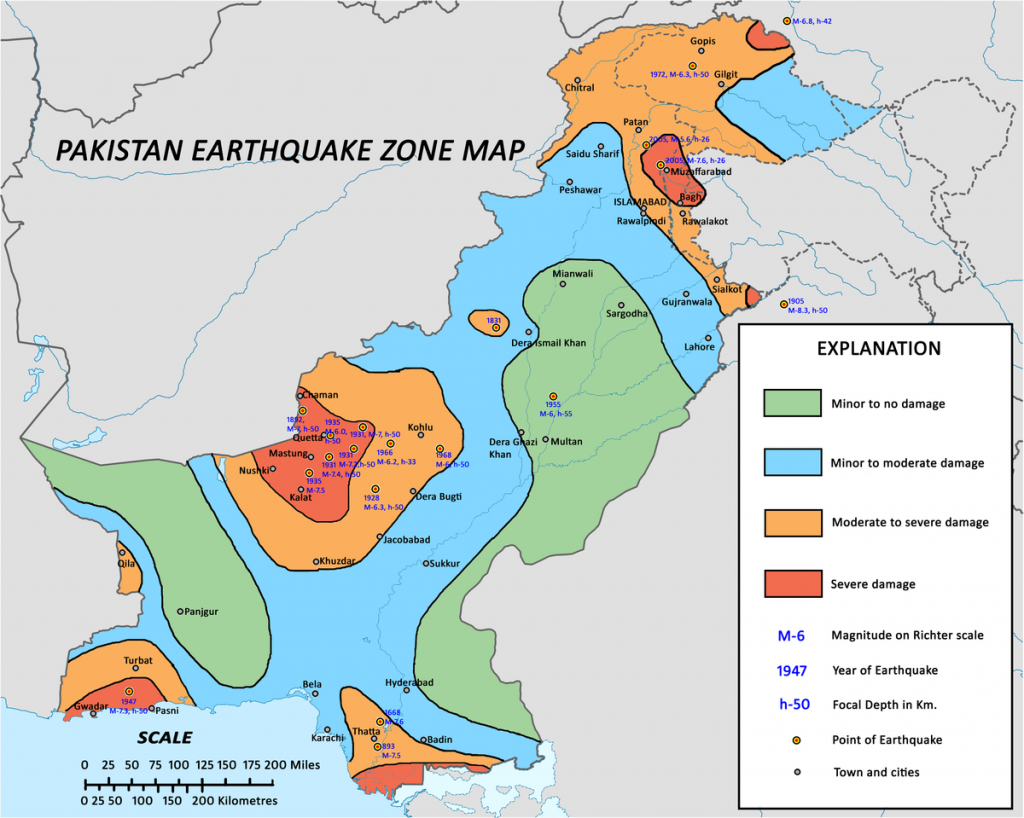 [2] River channels which no longer have any water due to different environmental factors like a change in a river’s course.

[5] Ramsar Convention is an international treaty for the conservation and sustainable use of wetlands. Any wetland on this list is protected under International laws.

[7] IUCN 1991. The Mangroves in Sindh are unique as they thrive in mingled fresh and salt water